Restaurants might come and go in Tulsa, but many have made their mark on our city’s history for their food, service, owners and atmosphere. Here’s one serving of Tulsa’s gastronomic history from "Lost Restaurants of Tulsa."

When Dick Greenwood purchased the business near East 31st Street and South Harvard Avenue in 1962, it had been open for two years and was considered a bar that occasionally served food. Greenwood flipped the focus of St. Michael’s Alley and turned the corner restaurant into a Tulsa tradition.

The food was divine, from the drip beef sandwich to the charcoal-grilled chili cheeseburger to the homemade cheesecake. But it was the espresso machine, the first of its kind in Tulsa, that really put them on the map.

The tall wooden booths were the most coveted seats in the house. Dave Brubeck jazz played from the jukebox while people of all stripes sat and talked about the news of the day over drinks — including the Oklahoma Martini, a glass of Schlitz beer with an olive.

Greenwood closed St. Michael’s Alley in the early 1980s, but it reopened in 1988 with Michael Lavelle at the helm. It lasted for 10 years before the restaurant faded into the history books. 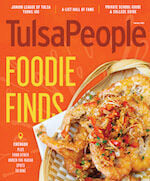