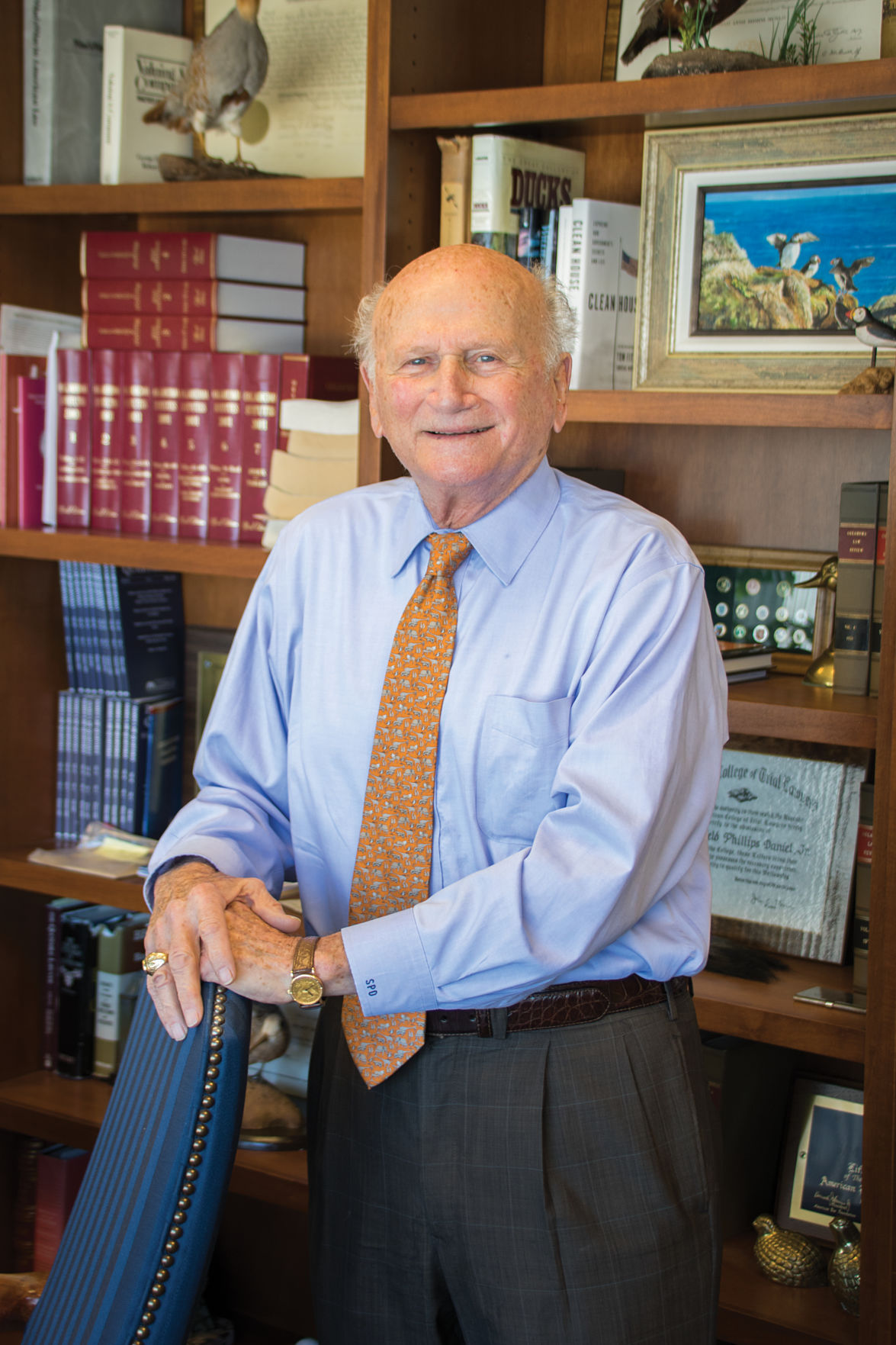 Lawyer Sam Daniel has been involved with NatureWorks for decades. A statue of a mother coyote and her pups at North Ninth and East Main streets in Jenks is dedicated to Daniel. 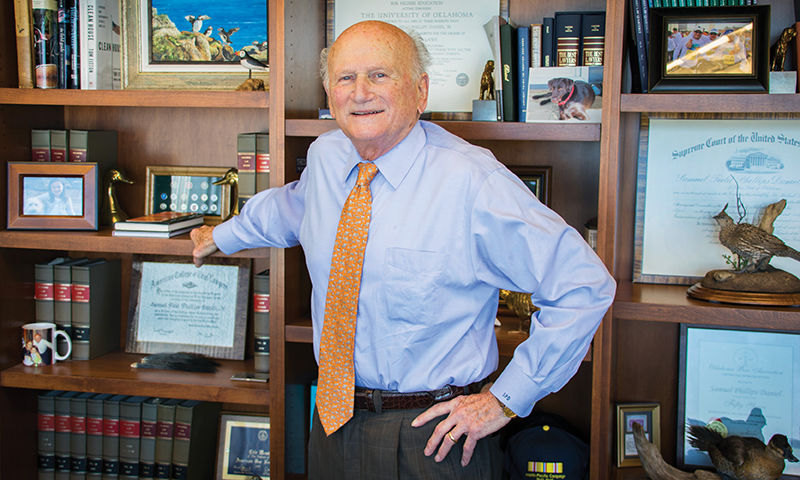 In a career that spans nearly six decades, Sam Daniel has become a respected family law attorney who has witnessed historic changes in Tulsa.

Briefly during grade school, he lived in Oklahoma City, where his next-door neighbor was Oklahoma’s own federal judge Alfred P. Murrah. Daniel says his parents traveled frequently, so he spent many nights at the Murrah home. He looked up to Murrah as a role model and became best friends with his son.

Daniel loved the judge like a father and decided at an early age to follow in his footsteps. Now at 85, Daniel is a member of the downtown law firm Doerner Saunders Daniel and Anderson. With a supportive family, full work schedule, disciplined workout regimen and love for the law, Daniel shows no signs of slowing down.

Where did you go to university? Why? My bachelor’s degree is from Georgetown in economics and philosophy. I came under the influence of an Augustinian priest at Cascia Hall where I went to high school, and he convinced my parents that I needed to go to a good school, that I needed to grow up a little bit and that I needed a Jesuit education. I’m not Catholic, but I went to Georgetown because my parents were convinced I needed a little more discipline before I emerged into the world. I wanted to be a lawyer since the get-go, and I wanted to go to OU for law school. I graduated in 1959 and started practicing law that year. My first job was at a law firm in Tulsa, which has subsequently been merged into GableGotwals.

What was one of your most defining moments in life? When I received my officer’s commission in the United States Air Force. I was in the ROTC at Georgetown. When I graduated, I received my commission in the Air Force, so it was an interesting experience. I was the wing commander of the ROTC at Georgetown and led the ROTC contingent from Georgetown at (President Dwight D.) Eisenhower’s inaugural parade in 1953. I got called on active duty after one year of law school and spent two-and-a-half years at Luke Air Force Base in Phoenix, Arizona. When I came back from active duty, I went back to OU and finished law school.

What age do you feel right now and why? I feel like I’m 70 years old because I have worked out regularly for 40 years. I didn’t start feeling any age at all until I was about 70 years old. My workout schedule is every other day and one day on the weekend. I do the treadmill, the elliptical, weights and calisthenics. I walk 2 miles on the treadmill. I’ve been doing that for better than 40 years. I make it a priority. I have an extremely light lunch on the days I work out — usually a bowl of soup.

How would your friends describe you? Energetic, multi-faceted, outgoing. That’s how I think my friends would describe me.

If you could witness any event of the past, present or future, what would it be? Being at Ike’s inaugural parade — that was probably No. 1. He was the first president I got to vote for. One of my favorite things when I was in the Air Force was to watch the Thunderbirds. They were stationed at Luke Field, so that was a very important event for me. I always participated in the ground aspects of it. I was not an Air Force pilot; I just learned to fly in the Air Force. But the Thunderbirds were incredible, and they still are.

What was a "worst time" and how did you pull through it? I had two alcoholic parents, and it was the worst time of my life when I was 10, 11, 12 years of age. I just ignored them and took care of myself. I did my own thing when I was 10 years old — as long as I was home in time for dinner. I grew up very fast.

What concerns you today? My work sometimes keeps me awake at night — thinking about what I haven’t done that day and what I’m going to do tomorrow. But my concerns in general are the divisiveness that exists in the United States today — among people, politics, religion — divisiveness in every aspect of our lives. It didn’t exist when I was a little boy.

How do you measure success? Marriage, family and career. If you can work all those things out, that’s success.

What is a favorite Tulsa memory? Quaker Drug Store. It was at 18th and Boston. It was where all of the high school kids hung out who went to Central High School and some from Rogers High School. They all gathered and danced the jitterbug to the jukebox in the back of the drug store.

Does the Quaker Drug Store building still exist? No, it’s where the Spirit Bank building is now. That was the place to go. If you ever had a few minutes, you went by the Quaker to see all of the gang. I remember Teresa Brewer was a (popular singer at the time), and she sang a song called ("Music! Music! Music!") (with the well-known line) ‘Put another nickel in, in the nickelodeon’. That song was on (often) when we were at the Quaker Drug Store. That was my favorite memory of Tulsa.

Describe a perfect weekend in Tulsa or elsewhere. In the fall of the year, walking across the western Kansas landscape with my retriever hunting pheasants. It’s great.

What have been the most significant changes you’ve experienced in Tulsa? The proliferation of restaurants and infrastructure such as the Broken Arrow Expressway and The Loop (Inner Dispersal Loop).

Any career highlights you’d like to mention? I’ve been a fellow of the American College of Trial Lawyers since 1981, which is by selection. I’ve been listed in Best Lawyers in America since 1983. I was president of the Tulsa County Bar Association at one time. I’m very proud of being a lawyer, and I love what I do.

What kinds of changes have you noticed in your field throughout the years? One of the things is the entry of women into the legal profession. I’ve watched that happen, and it’s been wonderful for all us boys and for women. I deal with a lot of women lawyers. I do a lot of family law, and they’ve made a difference in the practice of law.

No plans to retire? No.

I hear you are quite the outdoorsman. Talk about your involvement in NatureWorks and other sportsman activities. Wildlife is very important to me, and being outdoors is very important to me. I’ve been with NatureWorks for a long time. I’m also a board member of the George Miksch Sutton Avian Research Center in Bartlesville, and I’m a retired director of the Oklahoma chapter of the Nature Conservancy. I don’t hunt pheasant as much as I used to. I’ve lost so much of my hearing; I want to try and save what’s left of it. Something I’m very excited about is I have collected all but one of the species of waterfowl in North America and had them mounted. There are 43 birds, and Woolaroc Museum has accepted it as a permanent exhibit. So before the summer is over, my waterfowl collection will be exhibited in Woolaroc.

What else keeps you busy? We like to go see our children, grandchildren and great-grandchildren. We go to Dallas quite often. We have been involved in the Tulsa Ballet for some time, and we like the theater.

What’s your workload like right now, or what’s a typical day for you? My workload is 8:30 to 5, but I’m not putting as much pressure on myself as I did when I was 70. Nobody gets out of this life alive, and I just love what I do. I love being a lawyer. I love being here at the firm with all of my partners.