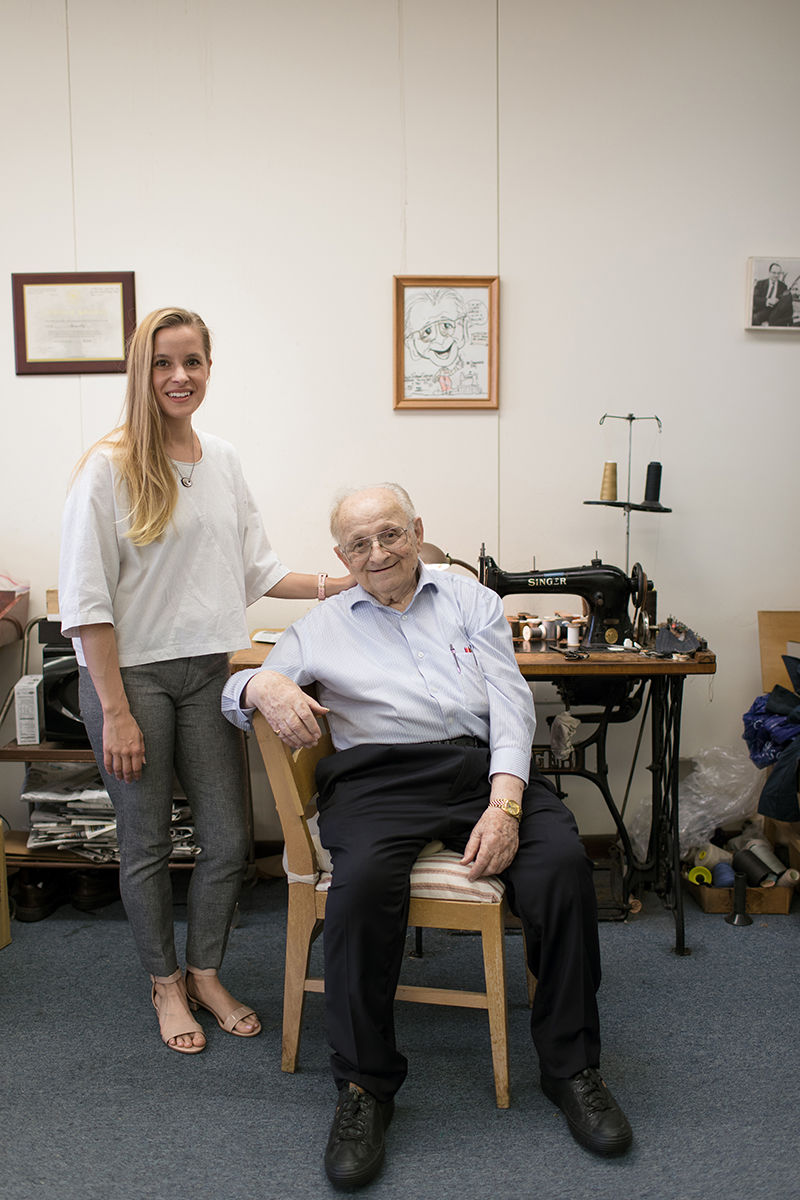 Shaelynn Haning and Sherman Ray inside his midtown tailor shop 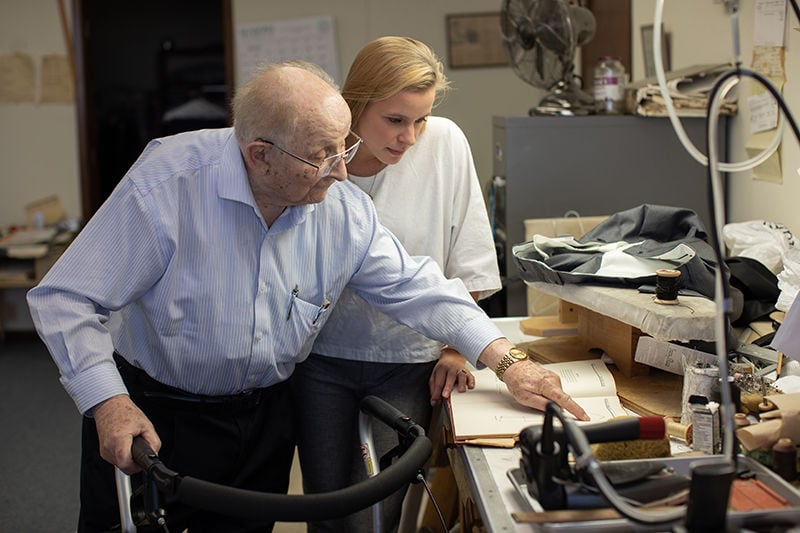 The bird almost looks like it flutters when Mr. Sherman Ray flexes his fingers. Etched into the middle of his left forearm, it appears suspended over the top of a fainter tattoo of faded ink and vivid memories.

As the needle slides through to the other side of the woolen jacket cuff he’s holding, I think about how this local tailor spends his days; always working with his hands. As he reaches for this or picks up that, I imagine what the little bird’s wings discreetly cover. I think about how long he has lived and how he got here.

If you ask him, he’ll tell you. He explains it simply, in the same words his father used; "If you have a skill, you’ll survive." And survive he has.

Mr. Ray, "the little polish tailor" he dubs himself, is in fact the only survivor of his family. His father taught him the trade he still utilizes every day: the art of clothing construction. Mr. Ray’s art narrowly guided him through an unimaginable war and two prison camps long before the plains of Oklahoma were on his horizon. By the time he arrived in Auschwitz, his siblings and parents were already gone. With his craft as his only protection, Mr. Ray continued his work tailoring military uniforms, whiling the cold days away, needle and thimble in hand.

He remembers the day the war ended and carrying his father’s words forward with him as his new freedom gave way to new opportunity, but only for those who were employable.

Twenty-six families of survivors found their way to Oklahoma City, where professionals, especially trained tailors were sorely needed. Once more, his craft provided, making him nearly $100 a week in 1954, nearly enough to provide for his young wife and himself as they made their new home in America.

Over the years his business has always soldiered on, from Oklahoma City to Tulsa, surviving as he knew it would. At 98, his heart is still deeply invested in the trade that saved his life, as he works in the shop bearing his name at the corner of East 31st Street and South Jamestown Avenue. There sits a little wooden stool where I’ve taken to listening, when he’s in the mood to share about his past or present. There are so few left in the trade that I’m lucky for every second this master tailor lets me perch here and badger him about forgotten but still essential techniques in our shared art. Though one can learn many things in our modern world by typing them into a search box, YouTube doesn’t hold a candle to Mr. Ray when it comes to lowering a suit jacket collar.

Let’s rewind. How did I end up at Mr. Ray’s? I used to have a normal job. A job that people expected me to show up at every morning and that ended when I left each night. But that wasn’t always the case.

I grew up a creative. A maker. A builder. A welder. And eventually, a tailor. I always figured someday I’d find my way back to that life again.

After six years as a military wife, my husband and I relocated to Tulsa from our last duty station at Fort Sill. We moved into a little place on 31st, just down the street from Mr. Ray’s shop.

With a degree in apparel design and development, I dragged my sewing machine with us from military base to military base, but we only stayed long enough for me to sew on his rank and sometimes new shoulder bars.

In Tulsa, as a permanent resident for the first time in my adult life, I drove by Mr. Ray’s every day wondering if the time had come to make the leap and start stitching together a sewing

Every day I vowed I’d go in to meet him. The man with an incredible reputation in this new-to-me city whom I’d heard so much about. And every day I drove by and continued on to my normal job.

But then word got out that I knew how to sew. And well-intentioned friends started to guide those in need of a little tailoring and some alterations my way. They called and texted and piled on until that normal job’s demands got harder to meet and my emotional quota was met every night and every lunch break that I snuck home to cut the hem off an obscure vintage dress and insert it into a side panel so my latest client would be uniquely well dressed for a wedding that weekend.

Mr. Ray’s was the first place I went after I left that normal job.

I finally crossed the threshold and barely introduced myself before asking, "Could I just watch you for a while?"

He didn’t know me. He didn’t know (or, presumably, care) why I was there. But he didn’t miss a beat when he responded, "It’ll take a lifetime to learn."

So I pulled up my stool, and our visits began.

I try to catch him in the mornings when the shop is quiet. I come in with my coffee, take up my perch and bring him things as he asks for them, maybe a needle or silk button thread, or fill the water dish for his tailor’s sponge used in dampening and pressing the woolen suits he’s working on that day.

"Open this drawer," he says. "I have a tool I want you to see." It’s an exquisite and impossible-to-find piece of hardware. A steel and bronze buttonhole press with various blades and keyhole punches, all aligned on different knobs to turn and adjust to create just the right size cut for the job. There’s a reason it’s so hard to find. It was made in Germany in a time when the United States was not receiving imports from Germany.

He holds the tool and turns the dials and I watch the bird’s wings flutter again.

Sewing allowed him to survive, and the tattoo covers the reason he does.

As a budding tailor with a mere 15 years under my belt, I am painfully aware that I know virtually nothing when I watch his fingers slowly feel their way along the shoulder seam, mapping out the alteration needed for this particular suit and this particular client.

This assessment is one of the many reasons I keep coming. I lean a little closer and ask him; how do you lower that collar … how do you shorten that cuff ... how do you take in the seat of that pant.

The answer is always the same.

But that doesn’t ever answer my questions.

For a while I thought this was a facetious answer as he begins each visit trying to convince me to go into another trade, telling me to do something useful, like become a nurse or a teacher. I tell him the die is cast, I’m too far gone, so he’ll just have to show me.

Begrudgingly and thoughtfully, he eventually gives in but never through words, only ever with his hands. That’s the trick with this craft.

"You’ll never learn by only watching, you just have to do it," he warns.

And finally I understand his answer.

There are no tricks, no shortcuts, no Google search that will make a master tailor overnight. I ask him questions as if I hope he’ll spit out a clear, concise Wikipedia page response, but the only true answer is that in the end you’ll have to dig deep, spend the time and just do the work "with your hands."

"That is all for today," he says as if class is dismissed, acknowledging that I’m here to learn whether he likes it or not.

"Maybe I could come by again?" I ask, anxious not to lose this living link to our dying art. I can see every year he’s earned around his squinting eyes when he concedes, "OK."

Sherman Ray, 98, was born in Bialystok, Poland and is a third-generation tailor.

As a young teenager, Nazi Germany and the Soviet Union invaded Poland. His family was shipped to a concentration camp. He escaped en route but was recaptured and sent to Auschwitz-Birkenau, the extermination camp. He survived by tailoring uniforms for the S.S. troops.

After doing hard labor in both Auschwitz-Monowitz and Dachau, when the war ended in 1945, he weighed 75 lbs. His entire family was gone.

He struggled to survive in Germany and England before coming to the U.S. in 1949. He was 28.

Eventually he settled in Tulsa, where he married and had two children. Ray was a full-time tailor by day at downtown menswear stores and a private tailor at night. In 1968, he opened his own tailor shop with no sign, no telephone and no assistant because nobody measured up to his standards. Specializing in handcrafted suits, his clientele has included some of the city’s most prominent citizens. Often he worked 70 hours a week. Ray’s Tailor Shop is still in business at 3107 S. Jamestown Ave.