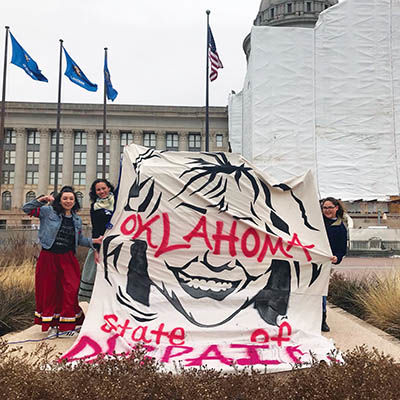 Sydne Gray, Ashley McCray, and Madison Lovell hold up their banner outside the State Capitol, Feb. 5 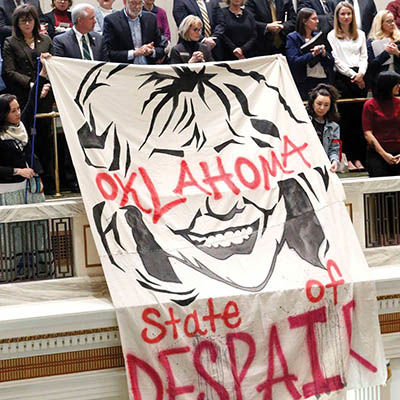 Banner drop in the Capitol Gallery

Near the end of Gov. Fallin’s final State of the State address on Feb. 5, three indigenous women in the gallery unfurled a large sheet banner. On it was painted Fallin’s face, the word "Oklahoma" scrawled in red across her eyes and nose, and "State of DESPAIR" written below her head. The banner was held by Ashley McCray, who is of the Oglala Lakota and Absentee Shawnee tribes, Sydne Gray (Muskogee (Creek)), and Madison Lovell (Kiowa). McCray is a co-founder of Indigenize OU, a collective at the University of Oklahoma that seeks restored justice for Native American OU faculty, staff, and students, and a co-founder of Stop Plains All American Pipeline collective, a mobile resistance group that opposes the Plains All American Pipeline Company, pipeline construction in Oklahoma, and other issues concerning the oil and gas industry.

Liz Blood: Who made the banner? How did you choose the wording and design?

Ashley McCray: My partner Jake made it. His tag name is Wanm. We wanted to send a clear message. At first we wanted it to be an indigenous face, but a lot people have issue with the failings of the state, the current affairs in Oklahoma. So we decided it should be more inclusive so everyone could relate to it in some way or another, so other people could use it to address the issues facing their communities.

"Despair" has such strong connotation. It imparts the message we wanted to share about the serious and failing state that we’re in right now. It’s not just indigenous or people of color communities that are enduring the despair. Even our teachers are panhandling for supplies—all while the oil and gas industry is virtually unregulated and destroying our earth. We are in a state of despair. We didn’t want Fallin to walk away feeling like she’s accomplished a lot when it is her administration that has put us in this situation. "Despair" elicits a real, tangible understanding for a lot of people for how bad things really are here. Across the board.

Blood: What did you think when people in the gallery booed you?

McCray: Mary Fallin was the first one to boo us. I think that kind of made us feel good, actually, because we knew that the people in the building weren’t friendly to us in any way, even when we went there using respectability politics. We weren’t really concerned about their response because they haven’t listened to us and still aren’t listening. Seeing Mary boo the banner—I felt like that was a success. She recognized and acknowledged the message we were sending, which was directly pointing at her. When she booed, it elicited more boos, but that’s okay.

Blood: What do you hope to see from the next governor?

McCray: The state of despair we’re in calls for a strong-willed governor who isn’t bought out by big oil and gas. We need someone who is against the established status quo. We’re not big on voting, but we wholeheartedly support Connie Johnson. We believe her vision, leadership, and history show she will be here for the people. She cares about the environment, indigenous communities and communities of color, people affected by police militarization and our industrial prison complex. She came to our Oka Lawa camp and camped with us and listened to our concerns and stories. She cares about the people. We think hers is the only platform that will help Oklahoma.

Blood: Why are you not big on voting?

McCray: As indigenous people, we don’t feel like we are Americans, that the American regime was forced upon us. I am Oglala Lakota and Absentee Shawnee. If I vote I am complicit in the genocide committed against my ancestors and future generations. I think voting ignores the injustice perpetrated on this land. Especially in Oklahoma, it’s a double whammy. Not only did we not consent to being Americans—we did not consent to being Oklahomans.

Blood: A Tulsa World editorial used the word "incivility" to describe your actions.  How do you respond?

McCray: It is anti-indigenous and racist to refer to the actions of indigenous people and indigenous women as uncivilized. That language comes from settler terrorism, when settler terrorists illegally conquered Oklahoma after the discovery of oil. So, we see that as a racist reaction to what we did—and very anti-indigenous. But we also understand that respectability politics is pretty racist. It was important for us to interrupt that narrative. We go to meetings, we meet with Republicans and Democrats, we meet with people in politics regularly—but we’re not being heard. So when people criticize us for being uncivil, that’s part of a legacy of settler terrorism that our people have been dealing with for hundreds of years.

But, also, how is it uncivil? Unfurling a banner? What about the legacy of environmental destruction, or our teachers not being able to afford school supplies? We question what is civil.

Oklahoma is an illegal state. It was set aside for indigenous people by treaty. So it’s ironic that we’re referred to as uncivil when settler terrorists came in and ignored tribal sovereignty and destroyed our space.