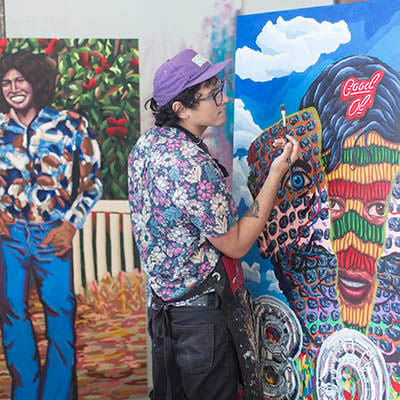 Eliseo Casiano at work in his former Baton Rouge studio 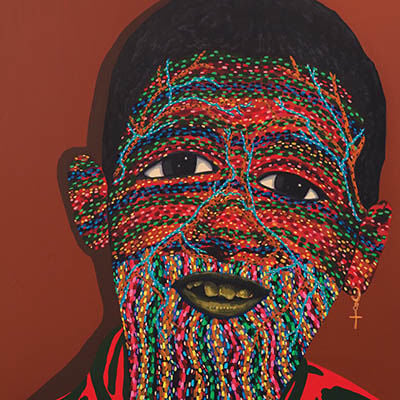 Last night I texted Eliseo Casiano a variant on the same message I’ve sent him every night at bedtime for the last six years or so: "Goodnight bud."

This tradition started out, like so many of the affectations of our 10-year friendship, as a dumb way to be weird. But I’ve since come to depend on our near-nightly exchange—sometimes elaborate, other times just a simple "G’night"—to ground me in my daily life, and remind me to value old friends like Eliseo.

When my mom’s health started to slip in the summer of 2016, Eliseo was one of the few friends I told. Then, when she died unexpectedly the next February, he was the first.

Throughout that voided season of fear and grief, Eliseo sent memes, made playlists, and kept in touch with texts ranging from absurd to supportive. (He once sent me a still from a Simpsons episode: Bart and Milhouse walking into the sunset with their arms around each other, which I saw in the ICU waiting room at Texoma Medical Center and burst into tears.)

Eliseo was living in Baton Rouge at the time, getting his MFA in painting at Louisiana State University. He grew up in Sulphur, Oklahoma, about a half-hour north of me—but we didn’t meet until a few years after high school, at East Central University in Ada, where he was studying visual art.

I knew Eliseo’s work was the real deal the first time I saw it. His vibrant, collage-style paintings of scrambled cultural touchstones pulsed with an impish joy. In the decade since, he has begun interrogating the slippery concept of American identity with that same spirit. His art draws from his experience growing up a brown kid in a southern Oklahoma town, and the family stories—the stories of the dead—he carries with him.

Eliseo’s artwork is featured on the beautiful cover of this issue. The painting is called "Broncos," and it honors members of his family who have passed.

He spoke to me from a back porch in New Orleans during a rainstorm.

Jezy J. Gray: When you look at "Broncos," whose face do you see first?

Eliseo Casiano: The top image. It’s my grandfather—my dad’s dad—Carlos Casiano. He passed away before I was born. It’s a WWII-era photo. I love that vintage military portraiture. Everyone seems so regal and youthful. They’ve got that Hollywood golden age swagger.

Gray: Did your family celebrate Day of the Dead?

Casiano: Not really. I mean, in a more relaxed setting. We didn’t grow up making altars. But that kind of iconography was present—like, with the candles and the food. That was normal, but not in that way where everything’s pieced together perfectly. It wasn’t so official.

Casiano: Yeah! That bread is beautiful to me. It just looks beautiful. When you go into a panadería, it’s the first thing you see. They look like little sculptures. What’s funny is I don’t even like it, but it was always in the house.

Casiano: It’s super dry, really dense. My family loves it. But I’ve met a lot of other Latinx people who say the same thing: ‘I don’t really like it, but it’s warm to me. It symbolizes home.’ Any time I go back to visit my parents, my dad buys a big-ass trash bag of it, and we just sit around the house eating it—especially during holidays. I’d never painted conchas before—and when I was working on this piece, I thought, ‘Oh my god, this is a major symbol in my life that I’d never even thought about!’

Gray: Tell me about the Selena photo in the painting.

Casiano: My family is from Texas, and she’s true Tejano royalty. The Queen of Texas. Selena is in my blood. She’s an icon—a saint in her own way. And I can relate to her. She’s a crossover. She brought Mexican culture into American living rooms, which is what I’m trying to do in a way. So she gets a place on my altar.

Gray: As soon as we landed on doing a Day of the Dead issue, I knew I wanted to bring you in for it. And not just, you know, because of the cultural stuff in your paintings. But just from watching your work shift over the last decade or whatever, as you’ve started folding these rich family stories into your work. Can you talk about that pivot?

Casiano: Representation became more prevalent in the work, for sure. Mining through family photographs, I started to put together family narratives in my own sort of lexicon that felt natural and more sentimental. But no matter what I paint, I’m representing the product of a brown, working-class family. My mother and her siblings were migrant farmworkers. I feel privileged to have soft hands and make pictures in a studio. My work is not trying to represent the Latinx experience. I’m trying to represent my experience, and what I’m able to know of my family’s.

Gray: How does death figure into it?

Casiano: I mean, everyone shares loss. And I’m putting these people who are important to me, some who are gone, in a new setting. My uncle probably never imagined that his likeness would be hanging on a gallery wall. So, telling the stories of people who have passed has become more important to me in that personal sense—but also in a political one: bringing brownness into a "white" setting.

Gray: Can you tell me about Ramón Casiano?

Casiano: Well, the uncle I just mentioned—Ramón—passed away when I was a couple years into grad school. He was basically my godfather. We were close. He used to joke that he was my real dad, because we looked so much alike. As I was mourning him, I was doing research on my family and learned I was related to another Ramón Casiano—a teenager who was murdered in Laredo in the ‘30s. My family never talked about it, but my uncle Ramón may have been named after him.

Gray: Drive-By Truckers wrote a song about him, right?

Casiano: Yeah! ["Ramon Casiano."] He was murdered by a guy named Harlon Carter, who went on to become executive vice president for the NRA. He opened the floodgates for gun rights during the Reagan era. He’s a big reason people feel so strongly about their "right" to own semi-automatic weapons—why it became a political issue. He joined the border patrol after killing Ramón. A white man with power, controlling brown bodies. It’s a disgusting history I’m attached to that I didn’t know about. It reminded me about the importance to keep family records alive.

Gray: What can you say about the painting, "Ramón"?

Casiano: It’s a portrait of my uncle at 15, the same age as the other Ramón when he was killed. His face is adorned with this luminous dot pattern, to kind of represent the glow of his brown skin. The pattern-work also relates to the depiction of mythical Albrejes, these Mexican zoomorphic sculptures. But, yeah—the painting commemorates the life of my uncle, and the murdered fifteen-year-old kid who shared his name.

Gray: What about "Hamptons"?

Casiano: That one is kind of a fantasy vignette, portraying my grandparents as these bobble-head caricatures. I placed them in the Hamptons, a place totally foreign to them and other working-class families, in these leisure workout jumpsuits—radiating from this kind of golden space of unattainable comfort and certainty. Their oversized faces are held back by a rope netting to visualize the baggage that comes from a life of code-switching between these different worlds.

Now I’m in this new setting, and I want to represent those family members who’ve helped me along the way. It’s like a tribute. And there’s that radical political notion, like I said before, of bringing brown bodies into white spaces. Pulling up a seat at the table. It’s time.