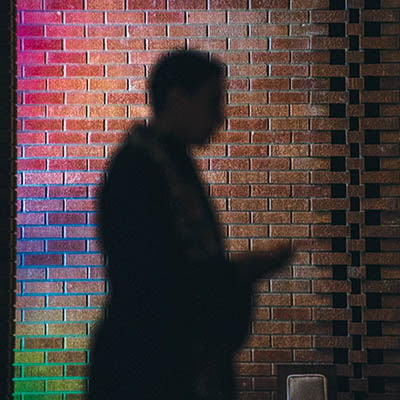 Julie Summers speaks before the congregation during Sunday services. 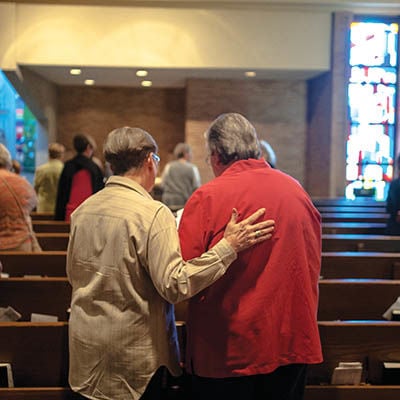 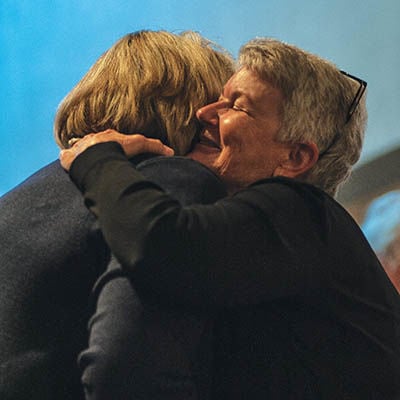 Tulsa has a hard-earned association with a particular brand of Christian faith. It is a flavor of Christianity closely allied with right-wing causes, with a strong condemnation of LGBTQ+ people and relationships. People from this community who are looking for places to worship are sometimes unable to be open with their sexuality or gender identity, and some are even cast out of their home communities. This can lead to deep suffering and spiritual conflict.

While Tulsa today has a fairly large network of LGBTQ+ friendly faith communities, this was not always the case. Leslie Penrose found herself among the only ones filling this need during a time of great spiritual struggle in the gay community: the AIDS crisis of the 1980s.

Penrose didn’t know what she was getting into when she visited a young man’s hospital room in 1986. The door to his room was plastered with signs warning against entering without gloves and a mask. He had been there two months and no one had come to visit him. The man, whom Penrose calls Joshua, was dying of a disease she knew nothing about.

Dr. Jeffrey Beal knew the anguish that Joshua was experiencing. Dr. Beal was then the only doctor in Tulsa treating HIV and AIDS patients, and he knew that with Joshua’s illness came profound spiritual struggle. He reached out to Penrose, who had been ordained earlier that decade in the United Methodist Church through Phillips Theological Seminary.

Joshua was a gay Baptist. His old faith community had ostracized him, and he had been confined to the hospital for weeks, inching closer and closer to his eventual plunge into the lake of fire. A nurse would tell Penrose that there was "no reason at all that he is still alive, except that he’s terrified to die."

When Penrose walked into the hospital room and introduced herself, his words shook her. "‘Don’t bother, my church already told me I’m going to hell. So you don’t even need to stay.’"

Joshua didn’t have the strength to talk for more than 15 minutes. Penrose returned every day, talking, rubbing his feet, or just listening for an hour or two. After a week, Joshua was dead and Penrose’s life had been changed forever.

Soon Penrose was getting calls from Joshua’s friends. In the space of a few months she met, counseled, bonded with, cried with, and buried about a dozen young men just like him. She started baptizing people in Dr. Beal’s office and attending group therapy sessions at night.

It wasn’t easy at first. The hard questions started coming during her very first session: "What kind of god creates a life and then condemns it to hell?"

Her answer: "Only a god that needs to die."

Statements like that got Penrose invited back to group therapy. Over the next few years, AIDS patients and openly gay folk began to fill the pews at the church where she was associate pastor. Although the congregation didn’t mind a few token minority members, things changed when they occupied two whole pews. In 1993, she was asked to leave.

Her bishop intervened, and Penrose stayed on. Later that year, Penrose began a "base community," an autonomous religious community organized by an oppressed group, much like a church without the building, money, people, or even an official charter. One of the first communities of its kind in Tulsa, it would eventually be called Community of Hope. Its mission was to welcome anyone who might not be welcome in a ‘respectable’ church. Congregants included out gay people, those just leaving prison, HIV/AIDS patients, and addicts all gathered to find peace at Community of Hope. It was the only faith community that served AIDS patients, and one of precious few that was LGBTQ+ friendly. They performed their first holy union, the closest they could get to a same-sex wedding, in 1994.

At first their congregation was nearly half HIV-Positive. In their first year, there were more than 50 funerals. Years later, in her Statement of Vocation, Penrose would write that "the question ‘who has died?’ clouded every gathering."

She got hate mail every day. "It was difficult, but it was also empowering to know pretty clearly who your support is and who it isn’t," she recalled years later. "The community I was with was so wonderful and so beautiful I wouldn’t have traded a single moment."

Community of Hope operated under the Universal Methodist Church until 1999. A new bishop had taken over for Dan Solomon, which complicated things. Solomon had been sympathetic to Penrose’s cause, and had allowed the formation of the base community. The new bishop, on the other hand, abided by the 1996 statement added to the United Methodist Book of Discipline forbidding ministers from joining gay couples. Penrose was brought up on charges of heresy, all but excommunicating her from the Methodist Church.

After some wandering in the desert, Community of Hope joined the United Church of Christ (UCC), whose structure allows its member churches much broader freedom to interpret scripture than the United Methodist Church.

Community of Hope closed its doors in 2013. Although there were many reasons, Penrose believes that ultimately the group had accomplished its mission and wasn’t needed any longer. "I think Community of Hope was a moment in time," she said.

At its outset, Community of Hope was one of the only Tulsa faith communities working with LGBTQ+ people, AIDS patients, and other marginalized groups. Now, the Oklahomans for Equality (OKEQ) website lists nearly 35 congregations: Christian, Muslim, Jewish, and interfaith—all of them open and affirming.

After Penrose left Community of Hope in 2007 to do international aid work, she began to attend Fellowship Congregational Church. Even before Fellowship became an Open and Affirming (ONA) Church, the UCC’s official term for LGBTQ+ friendly, it had a history steeped in civil rights. The church formed in the 1950s when a black couple tried to join Second Presbyterian Church, an otherwise all-white community. The ensuing controversy caused a split. A number of families left to form a more inclusive church, led by California transplant Reverend Russell Bennett. The spiritual refugees made their way to the United Church of Christ, and gathered at Temple Israel every Sunday.

Mark Goins, a member of the Church, said that this was a formative part of the Fellowship’s history. "We were always accepted by others and that’s the kind of message that we have. If we’re being accepted by others, then others should be accepted by us as well." The Church officially became ONA in 1995, and Parents and Friends of Lesbians and Gays (PFLAG) began meeting there soon after.

Goins calls Fellowship a "refugee church," meaning that people of all faiths and denominations find their way there—often to escape judgement or rejection from their old faith communities. Raised Catholic, he eventually left because he felt unwelcome as a gay man. But at Fellowship, he can attend church openly with his husband. "Here it’s not really about whether you’re gay or not. It’s about being a child of God. That’s it. We don’t worry about all that other stuff."

A lot of other people make their way to Fellowship for the same reasons. During a Sunday service, the Community officially welcomed several new members. Dee Dee Jones and Julie Blake started attending services in 2016, seeking peace after a traumatic election cycle. The couple stayed because of the church’s commitment to social issues. "This is the first church I’ve ever known where the members are responsible for working toward justice," Blake said after the service.

It is also the first church she and her wife have attended as a married couple. Although Blake says she has never felt excluded from a religious community, she was never comfortable attending as an out lesbian. She and Jones were both working in public education for many years, and being openly gay was out of the question. But at Fellowship, they have found a place where they don’t have to hide. "We say that everyone is loved by God and I think that’s a really healing message," Blake said.

Reverend Chris Moore, who leads the congregation, makes a point of being vocal about social justice issues. He is a fixture at immigration protests in the Tulsa area, and Fellowship’s website displays the United Church of Christ’s insignia in rainbow colors. He spoke about the week’s news during his sermon: 13 pipe bombs mailed to prominent critics of the President, 11 worshippers slain in a Pittsburgh synagogue, and two African-Americans shot in a racially-motivated killing in Kentucky.

"After this last week, some healing would be nice," he said.

His sermon pivoted into the story of Bartimaeus, the blind man who was miraculously healed by Christ. In Rev. Moore’s telling, Bartimaeus is an archetypal outcast. He points out that when the blind man cries out for healing, the crowd that had gathered around Jesus tried to silence him. But Jesus "shushes the shushers," and heals the man. When Christ healed Bartimaeus’ eyes, he welcomed all outcasts into his church, and obligated his followers to do the same. Or, as Rev. Moore puts it, "To welcome all of God’s creation as if it were all created by God." It was a blind man that Jesus met near Jericho, but in Rev. Moore’s view we could just as easily substitute a trans person, or a refugee, or a protestor in the street.

Rev. Moore invokes the Protestant Reformation in a call for another sort of reformation within the church. It is a call to reject forms of faith that cast people out, that leave them to die alone in hospital beds or vote them out of the community for living as who they are. "We’re gonna love one another," he concluded, as the crowd joined in: "Every single other."

It’s hard to imagine a more welcoming faith community than Fellowship. After the sermon I talked with Violet, a transgender woman who read liturgy during the service. She became a member of Fellowship six years ago, when her old church rejected her gender identity. Although she is the only trans member, she says she feels at home.

When the White House announced plans to redefine gender based on sex assigned at birth, Rev. Moore reached out to Violet and told her that the community stood behind her. "It helps immensely to know that," she said. "I’ve always felt that, but to hear it vocally is a totally different thing."

Violet says that many trans people she knows completely leave the faith because of the treatment they receive.

Finding a faith community that is open and affirming can be life-changing, particularly for LGBTQ+ folk who were raised in religious families. "Within the [LGBTQ+] community there are so many people who have been burned by the church," Goins said. "They haven’t found a community that is willing to tell them that they are part of God’s community. They are the children of God."

When asked if there was a central message he would like to leave with people, Goins smiled. "Come," he said. "Because you are welcome here. Everybody is."