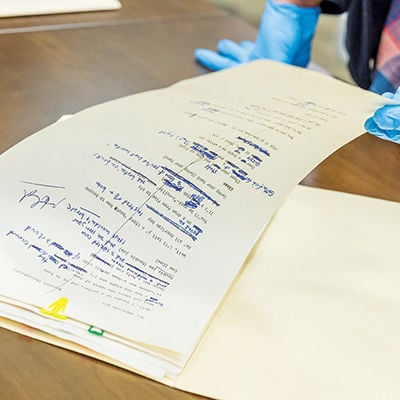 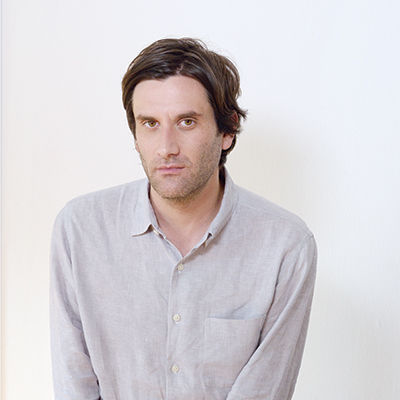 Over the last eight months, Michael Chaiken has been a part-time resident of Tulsa as the curator of The Bob Dylan Archive, working on behalf of the George Kaiser Family Foundation (GKFF) to oversee the organization and delivery of this landmark cultural trove to the Helmerich Center for American Research at the Gilcrease Museum.

There’s no educational road map for what Chaiken does; he has created his career as he has moved through it.

"I started college at the University of Delaware," said Chaiken, who currently lives in Williamsburg when he’s not in Tulsa. "I don’t really know why. I didn’t have any real career thoughts or direction; I just knew I liked literature. I was a lit major and I was kind of lost; I wasn’t ready. I did really well in high school, but I just couldn’t get into college at first. I remember I stopped going to class to watch the OJ trial."

Although the educational experiment at The University of Delaware ultimately failed, Chaiken was exposed to foreign films through a local clique of eclectics. There was a spark.

"I saw Jean Cocteau’s ‘Orpheus’ and it just blew my mind," he said.

Back in his hometown of Philadelphia, Chaiken recalled a video store in a working-class neighborhood in the Northeast part of town.

"I would find out later that it was one of the first video stores on the East coast. I wanted to see some more Cocteau, so I went in the store and while I was there I asked the manager if they were hiring and he said, ‘Yeah,’ and I started working there. Now you gotta understand, this wasn’t like a Blockbuster or something, this place had everything. If you were interested in Jean Cocteau, they had every Cocteau film. If you wanted to see Godard, they had all of them. So, for a year, that was my life. Working there and watching films—that was it. I got about as deep into that as you could possibly go. I was obsessive. I was ready."

Temple University was the opposite of his experience at school in Delaware.

"I had my obsession. I knew what I wanted to do and I had mentors in place—people who could help me. It was what I thought education could be or maybe should be—the tools were there, if you were passionate you just had to go towards it."

Through Temple, Chaiken made connections at Harvard, which gained him access to their archives and an internship after his junior year. Post graduation, he managed a film festival through International House, a cultural center at the edge of the University of Pennsylvania’s campus. When it was decided that the center would no longer put on the event, Chaiken pitched an idea to stay on and create a year-round film series, which helped him learn the mechanics of how to put together and promote programs.

Through his series at International House, Chaiken met famed documentary filmmaker, Albert Maysles ("Gimme Shelter," "Grey Gardens"), who spoke at a retrospective of his work that Chaiken organized.

Maysles’ production company, Maysles Films, was in the midst of moving from Manhattan to Harlem, and Chaiken soon jumped on board to help with the transition.

"As an independent film company, they were always looking for revenue to make the next film," Chaiken said. "So I helped them a little with their DVDs that Criterion put out—worked the contracts and stuff like that—but the one thing that I said to Al was, ‘Where are your outtakes to Gimme Shelter?’"

Chaiken plowed into the archives and found 30 hours of Rolling Stones footage that no one had ever seen.

"You wanna talk about your assets?" he asked Maysles. "Your assets are your archive. We gotta start really taking care of this."

And so he did.

The Maysles gig proved to be a career coup; it led to collaboration with Norman Mailer, which led to Chaiken archiving Mailer’s work on behalf of his estate after his death in November, 2007.

On the heels of archiving Maysles work and starting his job with Mailer’s archives, he met Glenn Horowitz, rare book dealer and archive broker whom he had read about in the New York Times. Chaiken cold-called him.

"He has me for lunch or something and he’s trying to pick my brain, he’s asking me what I’m doing," Chaiken said. "Then he goes, ‘Are you making any money?’ And I was like, you know, I’m doing all right, I really just love these guys and I’m trying to get their work out there…’"

Horowitz was blunt in his response.

"‘You’re a schmuck,’ he says. ‘Look, you got a weird set of skills here; there aren’t that many people that are doing this kind of thing. If you were to organize yourself a little bit better you could make an interesting life for yourself.’ And that was sage advice. That changed my life."

With a newfound seriousness and sense of purpose, Chaiken pushed on, landing a gig working on documentarian D.A. Pennebaker’s archives. Pennebaker directed the landmark Bob Dylan documentary "Don’t Look Back," and over the course of archiving the film’s unreleased footage, Chaiken started communicating with Dylan’s manager.

"I think [Dylan’s people] had been thinking about their own archives for a while and thinking maybe it was time to get serious. The other thing that happened was one of Bob’s manuscripts for ‘Like A Rolling Stone,’ ended up going to auction and selling for like, $2.5 million or something. That’s like two or three sheets of paper. That’s not even the tip of the tip of the iceberg that is Dylan’s archive."

"[Horowitz] calls me and says he thinks something is happening with the Dylan Archive," Chaiken said. "Well, Bob is the whole ball game for me—I mean, it doesn’t get bigger. I talked to Glenn and I said, ‘I don’t know what I need to do, but I gotta work on this.’ And he said, ‘Why the hell do you think I’m telling you about it?’"

Unlike many other artists, Dylan’s Archives were very well maintained and organized.

Chaiken started to categorize and establish what the archive might be worth to an institution by breaking it down.

More so than anyone else Chaiken had previously worked with, Dylan’s office was very clear on what they had, but the archives still needed focus in order to make them ready to present to potential buyers.

"I kind of came in and pieced it together so that you could look at it as a single document."

Roughly six months into Chaiken’s work on The Bob Dylan Archive, Tulsa and GKFF entered the equation. To his surprise, when the archives were acquired, GKFF offered Chaiken the job of being the "inaugural curator" of the collection. The opportunity was too good to turn down.

"The thing about these archive deals is after it moves to an institution, my job is usually over; I’m usually on to the next project," Chaiken said. "So this is the first time I’ve ever gone over with a collection."

Chaiken’s initial thoughts about Dylan’s Archives being permanently housed in Tulsa weren’t so much skeptical as they were curious. Horowitz, who was acting as the broker for the archives, explained to Chaiken his line of thinking and the picture became clearer.

"So I thought okay, Woody Guthrie archives are already there—that makes sense. That’s an anchor," Chaiken said. "The Gilcrease—so there’s Helmerich Center for American Research and Bob absolutely fits into that narrative and helps expand it into the 20th century. So, after you get past the ‘Why Tulsa?’ question, the intellectual and cultural infrastructure is there."

He continued: "Big deals like this come down to people. The people involved in this thing aren’t knocking on Bob’s door asking him to come down here and cut ribbons—Tulsans just don’t seem to be like that. This isn’t about a service of celebrity and the people on Bob’s side are thrilled about that."

So, where does this leave Tulsa in respect for an opportunity to capitalize on its most recent gift from GKFF? Chaiken sees it as a staggering possibility for the city.

"Look, you’ve been here a hell of a lot longer than I have. I’m coming into this place with the Guthrie Green already built, the ball-field is built—I’m coming into this place where there’s tremendous sense of revitalization. My take on this is that the work that GKFF is doing now is going to be the building blocks for a different kind of future for Tulsa. If this past weekend [the Dylan Film Festival] was any indication, there was certainly a healthy amount of local interest, but there were also people in from Toronto, people from L.A., people from New York, Denver, Oklahoma City—so the word is out. I mean, this was just a small film festival."

Chaiken said the film festival was a first test to gauge the local, national, and international interest in the Archive.

"We wanted to know, what is the local interest? What is the national and international interest? And for a first test, it went very well."

As for his future, Chaiken remains in a role that makes him the most comfortable.

"Here’s a thing I love about Tulsa: You know in New York, everybody’s a curator. You pick out your socks in the morning and you’re a curator. And there’s an effort on the part of some of these people to make themselves the celebrity instead of doing the work and letting the work be the important thing. That’s doesn’t happen much here. Nobody would put up with it. Everybody would call bullshit on that in Tulsa. I’m doing community work. I’m here to serve the work and get it into the hands of those that can do more with it. I’m not here to editorialize or self-aggrandize or try and become the face of the Bob Dylan Archive—it’s simply not my purpose, and I get a healthy sense that people in Tulsa respect that."

For more from Beau, read his interview with Sherman Oaks.