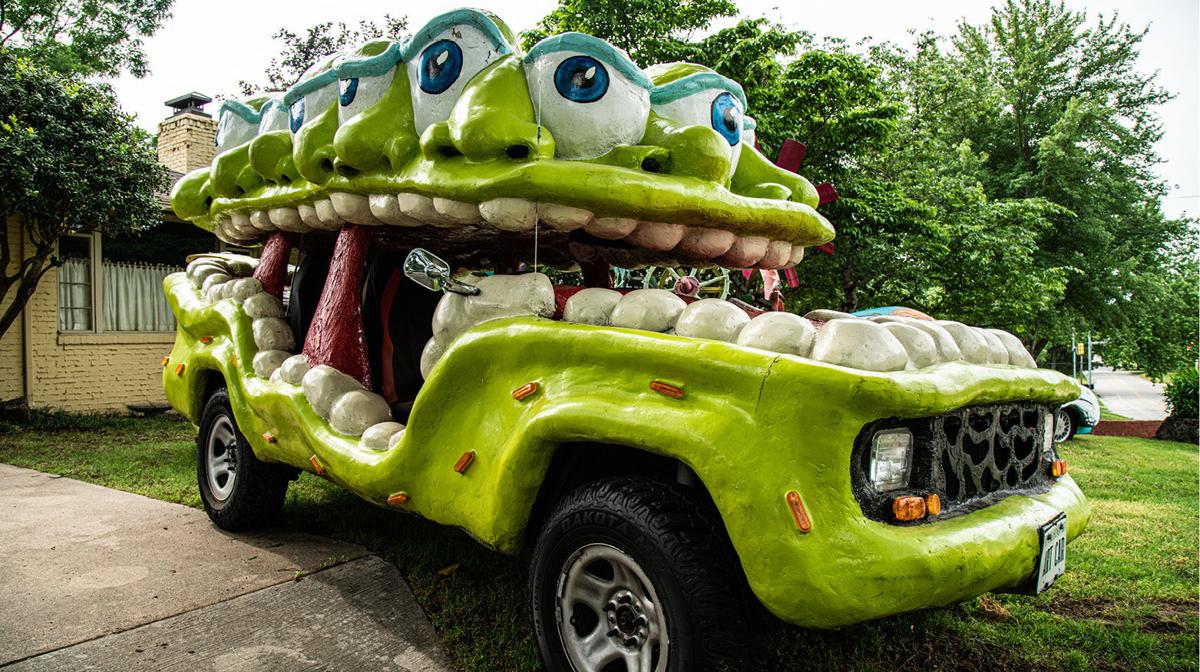 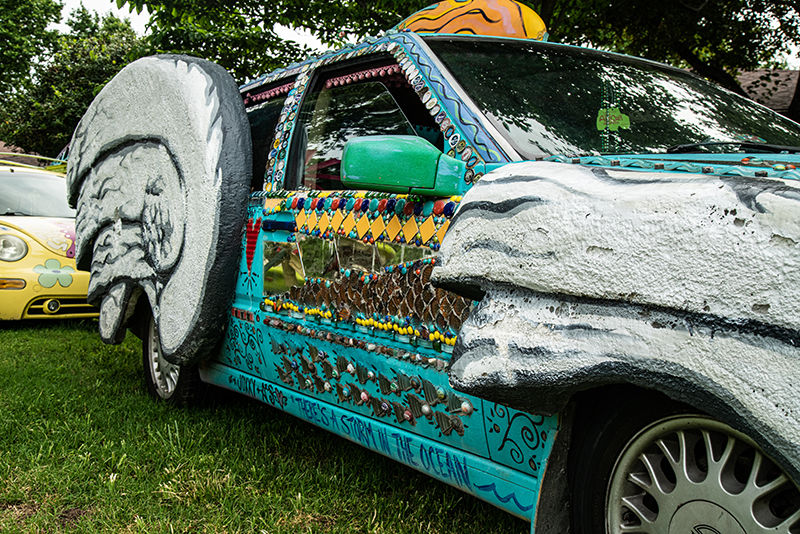 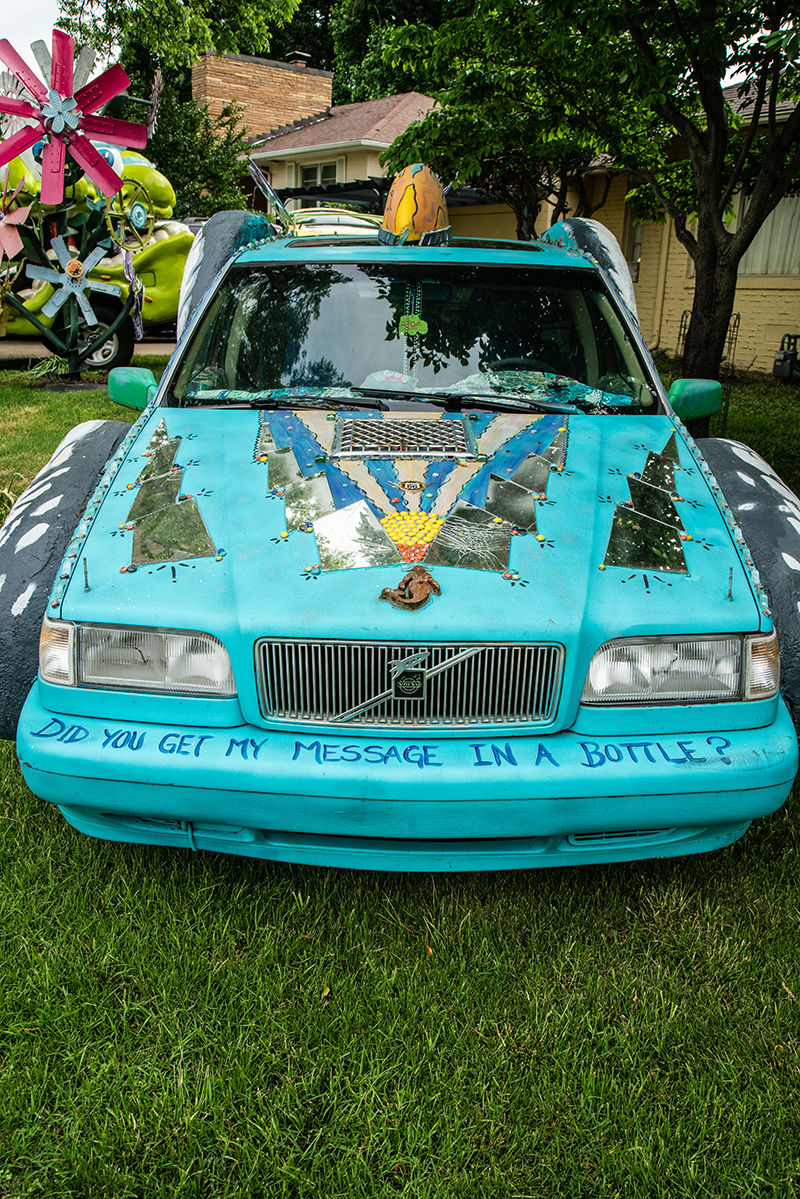 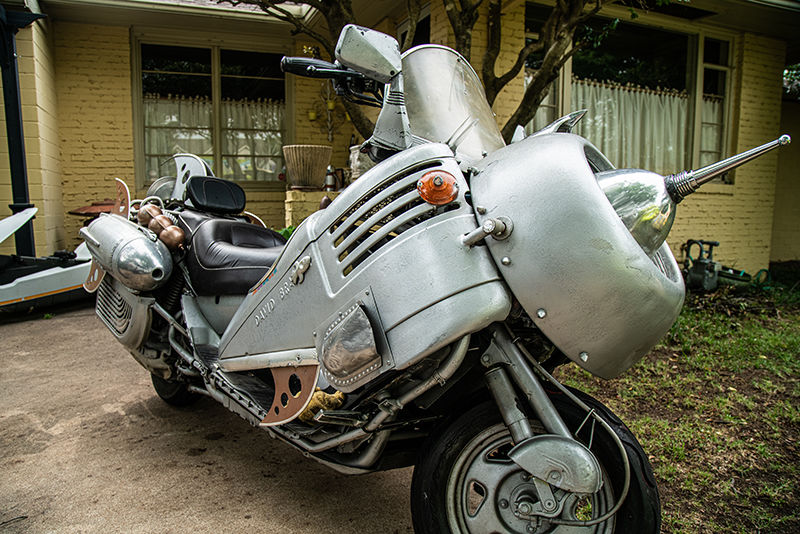 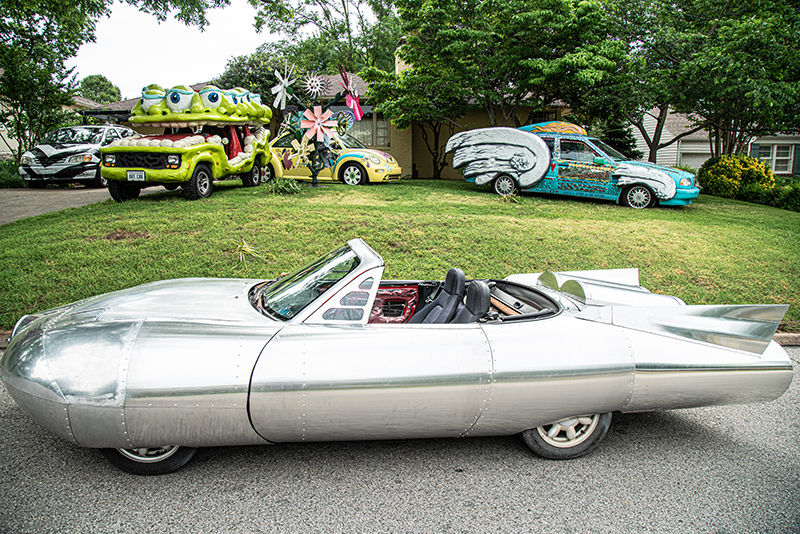 The name is still in progress for this ArtCar designed by Tulsa artist Chris Wollard during quarantine. Some contenders include: Carvid 19, Rona Roadster and Corona Cruiser. 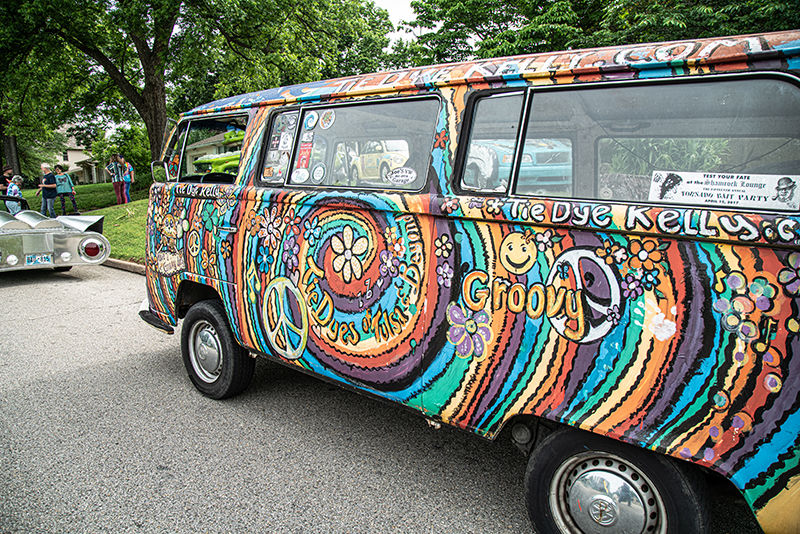 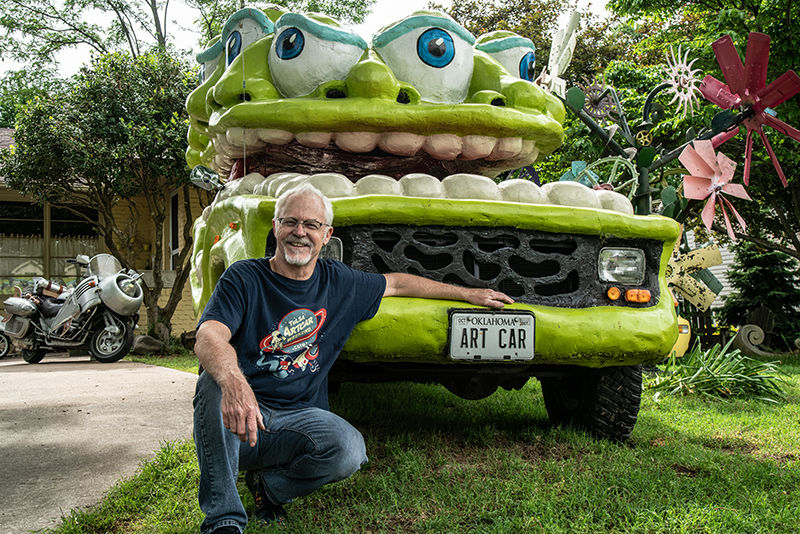 Tulsa ArtCar aficionado Charlie Larson with Ooja, one of his ArtCars. Ooja means "something that defies description."

The name is still in progress for this ArtCar designed by Tulsa artist Chris Wollard during quarantine. Some contenders include: Carvid 19, Rona Roadster and Corona Cruiser.

Tulsa ArtCar aficionado Charlie Larson with Ooja, one of his ArtCars. Ooja means "something that defies description."

When a vehicle reaches the end of its life and the price of repairs exceeds its value, oftentimes it’s traded in or scrapped for parts. But where some see the end of a car’s life, others see the beginning of a new one — by shaping and shifting the car into an ArtCar.

“You start with something that is worthless, has 200,000 miles on it, and you’re unsure it’ll be any good. If not, it’ll look good in a junkyard,” says Tulsan Charlie Larson, who is in charge of five ArtCars. He uses the words “in charge” rather than “own” because the cars are for everyone to enjoy.

Somewhere between a parade float and a roadside attraction, ArtCars are adorned with anything imaginable. Some look like mosaics, like Larson’s teal Volvo with foam wings affixed to the side named Tulsa Deco Evolvo. Others are more like sculptures, like Ooja, the multi-headed green monster on four wheels with no windows or windshield. Ooja means something that defies description.

Larson says he has been interested in unusual cars and roadside attractions since childhood. The semi-retired Tulsan grew up on the plains of Kansas and Oklahoma, but in 1985 he and his wife, Jeffry, moved to Tulsa and have been here ever since.

Before he was old enough to drive, Larson remembers painting and decorating his bike every few months, like the time after Woodstock. “I ran down to the store and bought plastic flowers to make a flower power Sting Ray,” says Larson, who has worked in antiques and car sales, among other things.

Roadside attractions and souvenir tchotchkes inspired his first ArtCar, which Larson made in two days after hearing an ad on the radio calling for ArtCars about 15 years ago. The car included “a desert (water) bag that cooled the radiator in the ’50s — suitcases, a ukulele, pink flamingos — anything you might find on the road to take home as a souvenir,” he says.

Community is a big part of ArtCar culture, Larson says. When COVID-19 hit, Living Arts of Tulsa and Philbrook Museum of Art partnered with artists for an ArtCar parade May 1-3. “We had a ball, and people were out in droves — in driveways, on their porches, sitting on the curb — it just felt so good to see people,” Larson says.

“This pandemic is bigger than all of us as individuals, but as a community, we find that we are all in it together,” says Sina McLin, Living Arts’ art and communication manager. “As an organization, we are finding that sharing art experiences (even remotely or at a safe distance) reminds us that we are never really alone.”

Larson met lifelong friends through ArtCar and pulled together an impromptu caravan with some of them for this story. He took turns driving Ooja and riding on his futuristic motorcycle named the Extraordinary Retro Rocketbike. Tulsa artist Chris Wollard debuted his latest ArtCar project, a Mazda Miata covered in sleek, hand-formed aluminum riveted together from scratch, which took four weeks to build. Kelly White (a.k.a. Tie Dye Kelly) and her mother Barbara Killion joined the caravan in White’s tie-dye VW bus. Lora Larson, a local physician and Charlie’s sister, joined in the teal Volvo.

As the procession drove through midtown neighborhoods, passersby snapped pictures, smiled and waved. This, Larson says, is what ArtCar is all about. Larson and the crew urge anyone interested in ArtCar to learn more. They’re always looking to add to their caravans.

“Anybody can be an artist (with ArtCar),” Larson says. “It’s folk art in its purest form — just like a roadside attraction.”