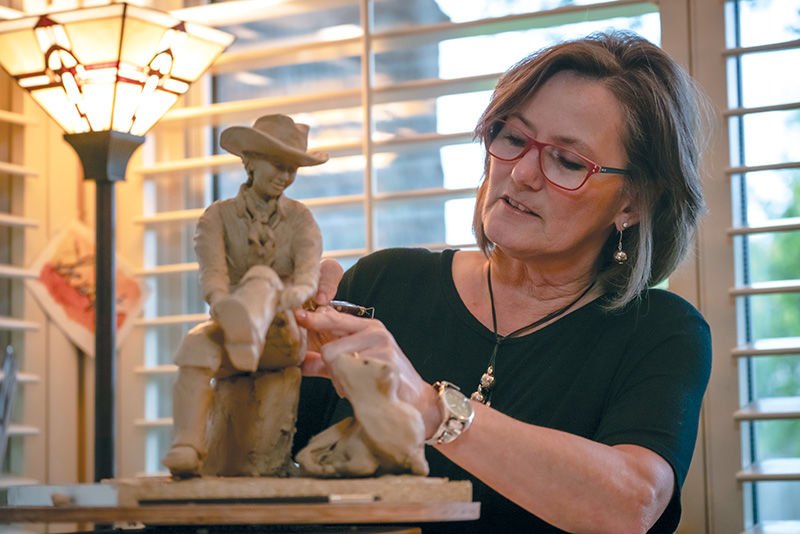 Pamela Winters began sculpting after her children left for college. She creates art in her at-home studio. View more of her work at winterssculptures.com. 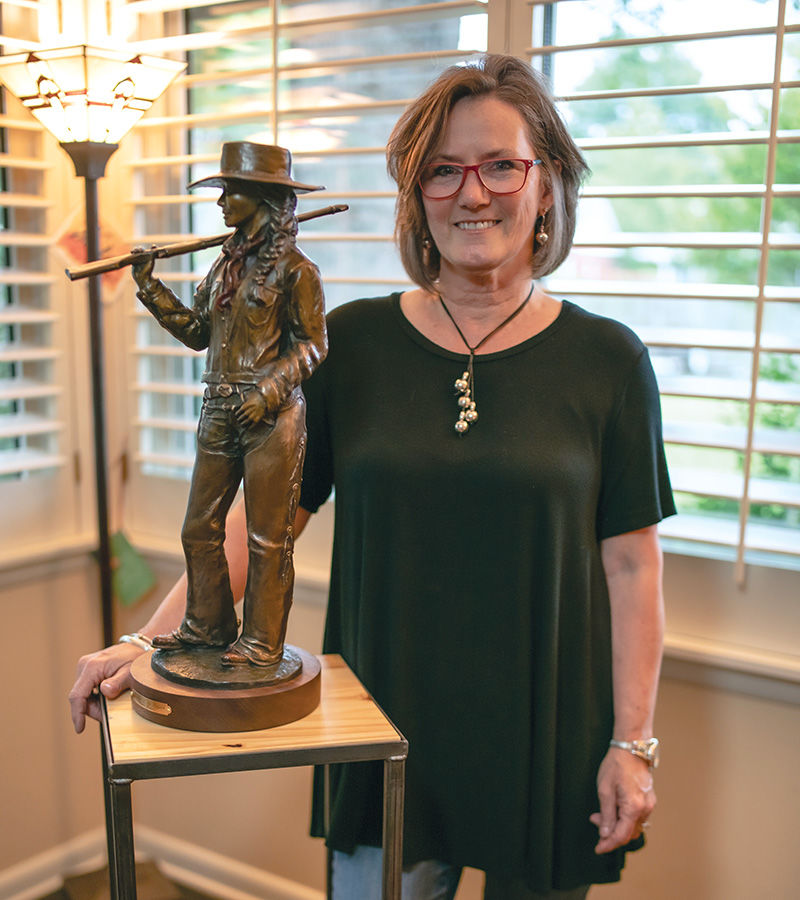 Pamela Winters began sculpting after her children left for college. She creates art in her at-home studio. View more of her work at winterssculptures.com.

“It’s not, like, a painting, where — you know, I’m looking at one now — and it’s a guy around this rock. He’s fishing, he’s pulling. Trout’s jumping, and there are bears on the other side of the rock that he can’t see. So that’s a whole story right there. (In contrast) I only have a piece that needs to tell a story.”

So says local artist Pamela Winters of her medium: bronze sculpting. Her work is microcosmical: It doesn’t lay out the entire story for visual study. She produces little bits with implied stories, like “Mine,” a lumbering bear carrying a fish in its mouth, or “Breakfast with Grandma,” in which a kindly old woman feeds some chickens. What is the bear looking at? Where is it headed? And the old woman in the dress: Who is she? What does that glowing smile on her face tell us?

Born in 1957 in upstate New York, Winters moved to Tulsa in 1981 and began bronze sculpting in 2007, after both of her children had gone to college (her studio is in one of her sons’ old bedrooms). Despite the late start, Winters has found success with her work. It has been exhibited as near as NatureWorks in Broken Arrow and as far as Art Fair Jackson Hole in Wyoming.

Animal life forms the bulk of Winters’ work. “I’ve always loved animals’ movements,” she says. “Being from Saratoga Springs, New York ... With horse racing, I used to love to rewatch the races in slow motion and just watch the thoroughbreds’ muscles move.”

True to this kinesiological interest, many of Winters’ sculptures depict motion — frozen in time. Just as many are still, however. Take “Heartbeat of the Prairie,” for example.

“She’s got details: butterfly on her boot design, on her belt buckle, bandana, her hair’s braided, she’s got zippers up the back of her chaps, silver tip on her boot … I love detail,” Winters says.

Even the titles bear important info. The subject of “Heartbeat” stands straight, looking into the distance, rifle resting on her shoulder.

“I didn’t want it to be, like, ‘Prairie Heartbeat.’ I wanted her to reflect the fact that she … could possibly have a family and be working on her ranch. ‘Heartbeat of the Prairie’ more tells what she does. She keeps it going.”

And so does Winters. “I’m always working on more than one,” she says. “You can’t just focus on one, or … you’re looking at it so long you miss something. And so you go back and forth, and then you have clearer vision.”

Winters’ work is at once prolific and gradual. Though constantly working, her output is limited by the medium, which doesn’t afford itself to convenience or speed. In 2019 she sculpted and cast a total of six pieces. The process takes about 14 weeks from the first clay mold to its casting in the foundry. You’ll hear no complaints from her, though.

Her website has the following line: “Sculpting evokes memories and feelings of moments and relationships.” Expounding on this, Winters speaks of how her sculptures mean different things to different people, and she aims for that polyphony.

“I just need to make sure that each piece says something and tells the story on its own without having to be explained.”