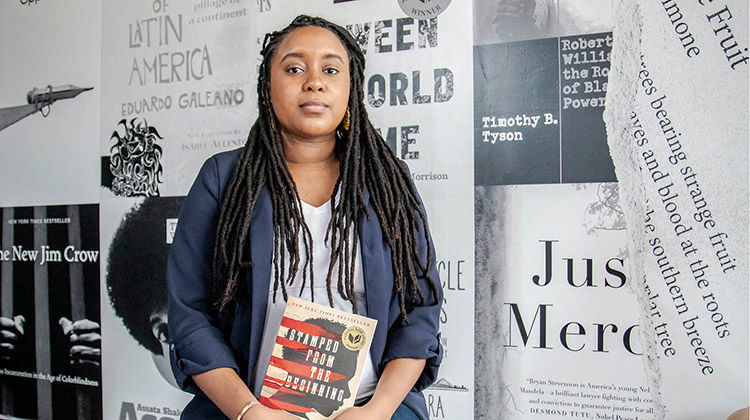 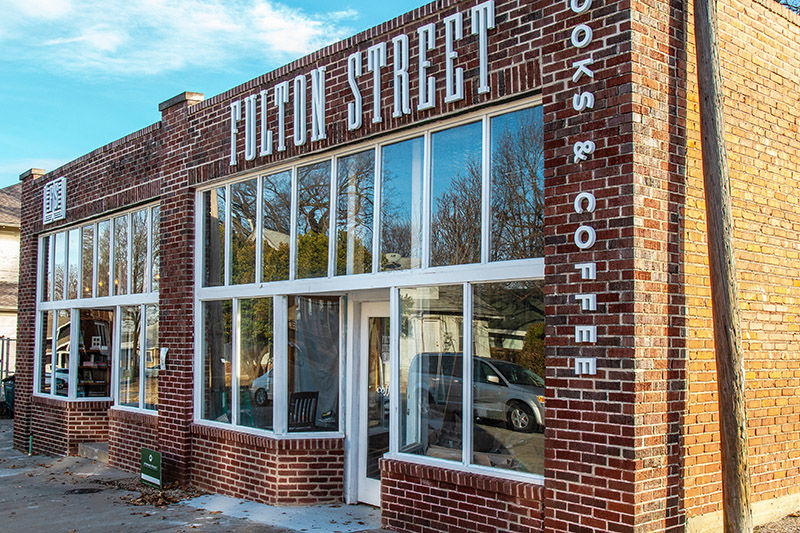 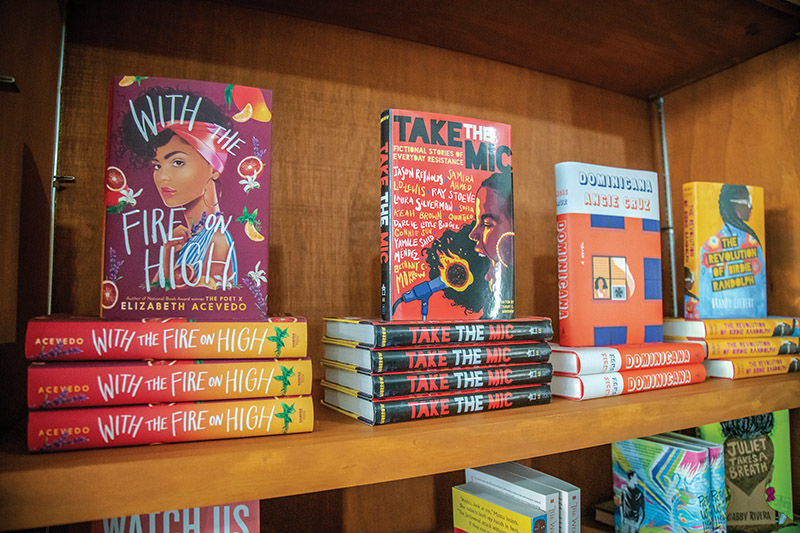 Fulton Street Books and Coffee founder Onikah Asamoa-Caesar felt homeless. She had never been without a house to live in, yet she had no place she could point back to as her starting point. Born in Elizabeth, New Jersey, Asamoa-Caesar moved with her mother and siblings to California at a young age. Her mother struggled with addiction, and, like so many women of color who fell victim to a drug epidemic, her children were removed from her care and placed in state custody.

Asamoa-Caesar and her siblings were sorted through foster homes, sometimes together, often apart, before being separated into long-term placements. At the age of 9, Asamoa-Caesar met the people she would eventually call her parents, but six years later they moved to Mississippi, and she couldn’t go with them. She again bounced from home to home until she was permitted to go to Mississippi, where she stayed for the last two years of high school. After Asamoa-Caesar turned 18 and was in college, her foster parents legally adopted her.

Disconnected from her birth family, Asamoa-Caesar didn’t know anyone who knew her before the age of 8. She had no baby pictures, no stories about her early childhood. She didn’t look like the people who raised her. In college, her friends would talk about going home, to the houses where they were born and, while Asamoa-Caesar had a family to return to, she lacked the kind of emotional home that served as a thread knitting together all the years of her life.

In her early 20s, Asamoa-Caesar reconnected with her biological father’s side of the family. She traveled to New Jersey, to the house owned by her grandmother, where an elderly woman sat at the kitchen table. Aunt Daisy motioned for

Asamoa-Caesar to come sit on her lap. Asamoa-Caesar hesitated. A grown woman, she felt strange sitting like a child in the lap of her elder. But as she sat there, her Aunt told her stories about what she was like as a baby.

It was here, in this house on Fulton Street, when Asamoa-Caesar was able to string together the events of her life and connect that thread to the larger spool of people who were her people. Fulton Street was home base for her family. At one time, most of her family lived on the street. It was a calling card. She could say, “I’m from Fulton Street,” and if you knew the area, you would know who her people were.

When Asamoa-Caesar found that street in Elizabeth, New Jersey, she found home.

A conversation with the founder of Fulton Street Books and Coffee, plus What the What pet adoption edition and new music from Zunis.

When it came time to plant roots for their own family, Asamoa-Caesar and her partner, Kojo, weren’t sure where home should be. They had both moved around so much — Kojo, who is from Alexandria, Virginia, lived in Ghana until age 10 — neither had a definitive hometown to return to. Though they had met in Tulsa, a Teach for America love story, they felt certain Tulsa would never be home. They longed for a community, and it didn’t seem like they would find that in Tulsa.

This discomfort was often validated by the reaction of people in the space. You walk in and you kind of have people glance up like, ‘Hmm. That’s interesting.’ You could see it on peoples’ faces.”

It wasn’t outright hostility. But it was a feeling of being “othered” in a way that was significant. Tulsa’s racial issues were so deeply rooted, so long in the making, that even for two highly educated, civic-minded activists with receipts to show the impacts they have made through their work, it seemed futile to spend their energy in Tulsa.

So they moved to Denver, Colorado.

But then a funny thing happened. Asamoa-Caesar came back to Tulsa for a short visit. She returned to Gilcrease Elementary, where she taught for three years, and she was met with the warmth and community she longed for. Kojo returned for a visit, separately, and had the same experience. The couple got married, and in a short conversation on their honeymoon, they decided all the reasons they left Tulsa were really reasons they should be here.

Ultimately, what sealed the deal for the couple was the history of Black Wall Street and Greenwood. Leaving Tulsa felt like running away from a legacy that they should be fighting to reclaim.

“There was a blueprint here that was destroyed, and would it be cowardly to not stay and fight and make sure that this is rebuilt?” Asamoa-Caesar says.

When Asamoa-Caesar first started thinking about opening a bookstore, it was in the spirit of reclaiming that legacy of Black Wall Street. Even though the Fulton Street Books and Coffee is not in the Greenwood District, it’s located purposefully in a rapidly changing north Tulsa neighborhood. The Heights (aka Brady Heights) is in the throes of gentrification, a divisive phenomenon that typically edges out people of color while a neighborhood rises in value. What would become the Fulton Street location stood out to Asamoa-Caesar because the building was beautiful — centered in a historic neighborhood and physically designed for people to connect with one another — and facing gentrification head on was a challenge she couldn’t pass up.

“It’s an opportunity to be here at a time such as this to start to … ensure that people aren’t being left behind as the neighborhood changes and that we’re having those conversations as a neighborhood,” she says.

Fulton Street Books and Coffee, 210 W. Latimer St., is divided evenly, bookstore on one half, coffee shop and bar on the other.

Asamoa-Caesar describes the space, due to open in spring 2020, as a coffee shop infused with books and literacy. Asamoa-Caesar isn’t your average bookworm, though. She believes literacy is liberation and, if you doubt the grandiosity of that idea, she would ask you to consider this question: What generation reader are you? Could your parents read and write? What about your grandparents? If you’re thinking, “I’ve never known anyone who was illiterate,” you are probably white. There was a time in the not so distant past when it was illegal for black people to read or write.

Asamoa-Caesar is, in a sense, a second-generation reader. She never met her (foster) maternal grandmother, but that grandmother couldn’t read, meaning the woman who raised Asamoa-Caesar was raised by someone who couldn’t read. That tangible evidence of inequity is what sparked her interest in creating a meaningful space for literacy. When she talks about Fulton Street Books and Coffee, Asamoa-Caesar rarely mentions books or coffee. These are material things, mere tools to leverage a higher purpose: community, intergenerational literacy and representation. Programming such as Syllabus, a cohort model book club, and the Human Library, part of a larger storytelling project, are designed to draw people close in meaningful conversation.

The space itself is physically designed to signal belonging. The exterior wall features a mural of Nina Simone, Audre Lorde and Frida Khalo. The interior wallpaper is a tapestry of book covers and excerpts of books written by and for people of color. The inventory is predominantly books by, for and about people of color.

“The beautiful thing about Fulton Street is that we’re able to build a space that allows people of color to walk in and have this sense of, ‘Someone thought of me when they built this.’ Have the sense of walking in, feeling like, ‘This is for me’. And if you’ve never not experienced that, it’s hard to describe how powerful a feeling that is,” she says.

Jahaziel Hiriart recalls feeling overwhelmed by emotion the first time she set foot in Fulton Street. It was just a small open house for friends and family, the space was still incomplete, yet every detail seemed to speak directly to her.

“I remember I felt cared for … like someone prepared a gift just for me,” Hiriart says.

She was surprised to find another gift as she browsed the limited selection of Fulton Street’s initial inventory. Hiriart’s father is a voracious reader of history and literature, but he often struggles to find books printed in Spanish. He wrote down the title of a book on Mexican history in hopes Hiriart could help him find it. She didn’t expect it would be easy to find yet there it was, on the bookshelf at Fulton Street.

“For those of you who’ve not had a place that you ever felt like was created with you in mind,” she says, “this is your place.”

“The Warmth of Other Suns: The Epic Story of America’s Great Migration” by Isabel Wilkerson

“Between Us and Abuela” by Mitali Perkins