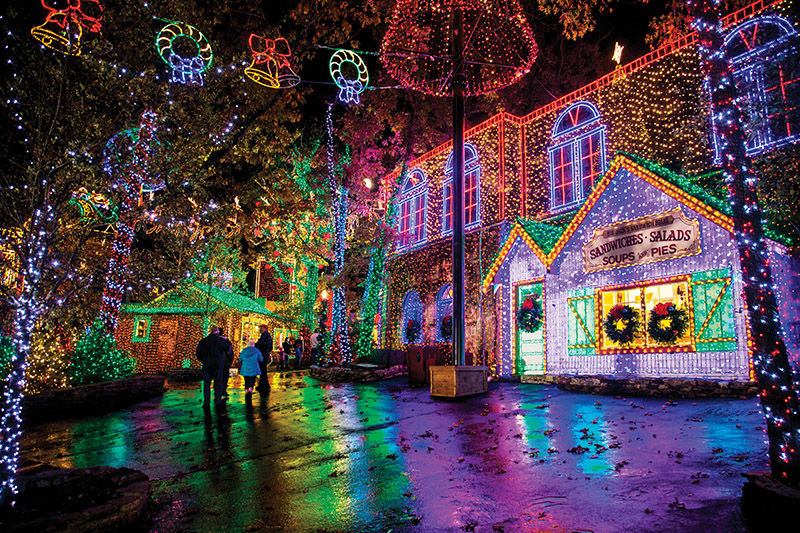 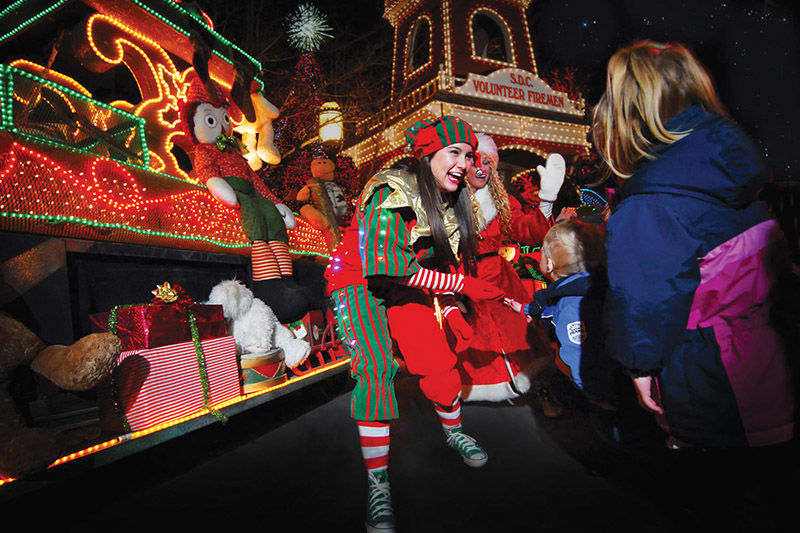 Branson, Missouri, has been known as a town of Ozark attractions for over a century, starting with tours of Marvel Cave in 1894. Today, the city is called the Live Entertainment Capital of the World, with many of the attractions steeped in nostalgia for the “good old days” of Americana. Christmastime adds another layer to Branson’s many activities, creating a wonderland for the whole family to enjoy.

Silver Dollar City is arguably Branson’s most well-known attraction. This theme park is situated at Marvel Cave, which has been bringing people to the area since the late 1800s. The park, situated at 399 Silver Dollar City Parkway, opened in 1960 as a small Ozark village with produced “Hatfield and McCoy” feuds. Over the years, it has expanded to a full-sized theme park with rollercoasters and other thrill rides while keeping the vintage Ozark aesthetic. SDC’s holiday celebration, “An Old Time Christmas,” features an extensive Christmas light display, specially themed stage productions and traditional eats like wassail and s’mores. The eight-story Christmas tree is quite a sight, too. The celebration runs from Nov. 2 to Dec. 30.

All aboard the Polar Express!

The turn-of-the-century train depot in downtown Branson isn’t just for show; it’s also the starting point for a Scenic Railway tour through the Ozark foothills. In December, this trip becomes the Polar Express. The ride lasts just over an hour and features a reading of the eponymous children’s book, servings of hot chocolate and cookies, and, of course, a visit with Santa himself. Tickets range from $34-$69. Find more info at bransontrain.com/tickets.

If live performances are your scene, the selection in Branson at Christmas hits another level. From Yakov Smirnoff to Clay Cooper’s Country Express, there are dozens of shows in December that add yuletide cheer to their performances. For a full list of shows and times, check out bransonchristmas.info/branson-christmas-shows.

Enjoy the lights and sights

It’s also possible to have an entirely self-guided good time during the holidays. Branson also is known as “America’s Christmas Tree City,” and it decorates accordingly.

Branson Landing, at 100 Branson Landing Blvd., is covered in festive lights, shops are decorated to the hilt and multiple parades are held throughout the season. One of the biggest, the Branson Adoration Parade, starts at 5 p.m., Dec. 8, and includes the lighting of a large nativity scene. Even the Promised Land Zoo and the Shepherd of the Hills Homestead are decked out in holiday splendor.

Where to eat in Branson

There is a wealth of dining options in Branson, with many restaurants catering to the same nostalgic feeling fostered by the rest of the town. The Hungry Hunter, at 5753 State Highway 165, is a good choice if you’re looking for traditional diner fare. If you want to try something different, India Clay Oven, at 2005 W. 76 Country Blvd., Suite 209, serves authentic Indian cuisine and is consistently ranked among the best in the region. Danna’s BBQ and Burger Shop, with two Branson locations, 963 State Highway 165 and 15 Hope Way, is my pick for a no-frills, just good food experience.