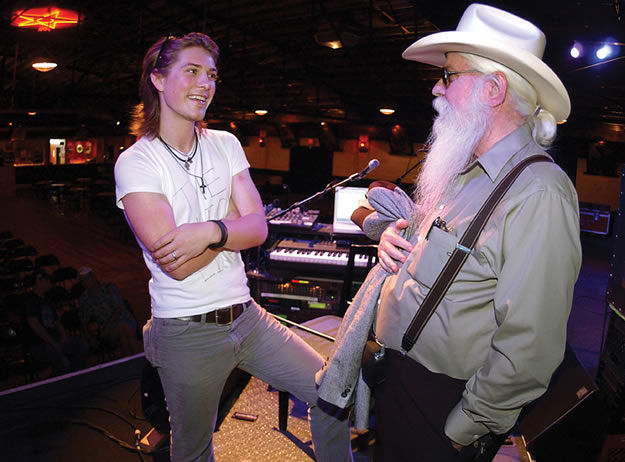 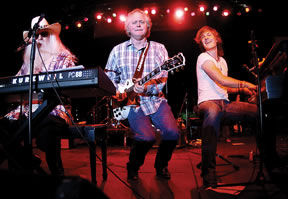 Jim Edwards: When did you first hear about Leon Russell?

Taylor Hanson: When we first started doing shows, there was this indelible cultural wave that Leon had left behind and there has continued to be this enigma that people all over the world admire.

Everywhere we went he was … this godfather of music that I didn’t quite know about — because I was only about 9 years old — and you say, "Who is this character?" And I was kind of in awe … of how there wasn’t anything musically that he hadn’t touched on.

I remember one of the first things I really was inspired by was Joe Cocker, and I think Leon’s affiliation with Joe Cocker was probably the first sort of clear lightbulb that went off for me with Leon Russell. It was his work with Joe Cocker that got my attention — knowing how intrinsic Leon was in helping to create what surrounded Joe with Leon’s band and his sound.

I was coming from being most directly inspired by soul music and early stuff that even Leon was hearing when he first started playing and the stuff that he was playing on as a session guy. I mean, you take a great singer like Joe Cocker and you think about the musicality that Leon brought and the ability to bring together musicians and create sort of the nest to foster so much music; that was probably the first place that I connected with it on the music level.

When did you first see Leon play live and how did that affect you?

I think that years went by before I actually saw Leon play; the first time I saw him play was downtown at one of his birthday bashes, I think at Cain’s or Brady. I couldn’t believe — especially as an up-and-coming keyboard player — the kind of movement and the way he played; it’s completely identifiable.

And I remember wondering, how is he able to keep up this pace and style, the way he moves on piano? I remember admiring it and wanting to get up under the hood a little bit and figure out where all that is coming from because he has this unique style where he really is a left-hand-leading kind of guy, which comes from that education as a kind of honky–tonk, rockabilly and all that kind of movement down in the left hand. He really leads with that and all that top-hand stuff creates the melody. And I still aspire to that. And, to me, that’s such a key part of what makes you immediately say, "That’s Leon."

Did you integrate any of that into your own keyboard style?

I feel, as a player, I am still aspiring to it. I have by no means even touched where he is, that keyboard style that he still owns.

And beyond his playing?

Probably, for me, the thing that is so indelible about Leon is just his songwriting, his craftsmanship, his gift for finding great melodies. I’m not a Leon historian, but, for me, the thing that remains so unique about Leon is his ability to connect the rootsiness of the dusty kind of influence of Oklahoma and the Midwest and whatever is in his DNA and still have kind of a broader perspective, a true musician’s craft — to somehow connect that with a sort of out-of-this-world, almost space-age ability to be magnetic on stage. I still think, even on his worst night, you can’t take your eyes off him. … It’s Leon’s eyes. ... When Leon’s looking at you, you know there’s a wild man lurking inside, in the best way possible.

What about Leon as a composer? Revisiting Leon’s recording studio résumé and body of original work, it’s hard not to make the connection between his gift as an arranger and his great songwriting ability — as if, at this time in music history, songwriter plus arranger equals composer.

Yes. Looking at music now — … well, throughout musical cycles — there are singular sort of influencers who push things to go a certain way. … To me, it’s unmistakable that in the last 40 years of rock and roll Leon is on a list of … at least the Top 25 or even the Top 10 people who have been one of these characters who ultimately, without them, it would not have created a shift in what happened in rock and roll and popular music. And, to me, that’s the enigma that you can’t quite put an accolade on; it’s like, how do you define influence? I mean, influence in the sense of musicians and people who came together because of him and songs that he’s written and the amount of times you’ve been covered … and to do that in some ways very, very publicly and in some ways almost silently.

It’s like, play the game of six degrees of separation, but do that in reverse: Imagine removing Leon from, say, 50 different scenarios and imagine what it would have been like. What would the Concert for Bangladesh have been like? What would Elton John be like, not having an ability to be inspired and reconnect his own humanity and musicality to a core innovator? Most people, the flame just kind of dies out. But for him, his impact has continued to blossom and reach further and to reach further, and, to me, it’s because there’s something singular about it. And that’s what makes things change.

The legacy of Tulsa music is absolutely a big positive for us, wanting both to continue to have a place that feels like our own and that we’re really from, and that gives us something to feel like we’re continuing. The Church Studio has still got that taste and that smell of rock and roll; you can feel it in the walls. It’s not about a building; it’s about what happens inside of it, and that leaves a mark.

A great personal Leon moment for us was several years ago when we went back and played Mayfest in ’05 after, I think, it’d been 13 years since we’d done that first show and Leon was doing his birthday show at the Cain’s. And I thought to myself, "Leon’s gonna be there," and I couldn’t think of a more fitting moment than to do something together, which we had never done.

So I went over to Cain’s with a mission to try and have Leon come join us and I had to go kind of sell it. And I walked up to Leon — we’d been able to meet several times different times over the years and he’d always been very gracious to us — but I had to kind of get him out of his comfort zone. So I said, "Leon, we’d really love to have you celebrate Tulsa with us. I’d really like to have you join us on stage if you can."

And he said, "Well, I’d really like that, but I really don’t know what I could play." And, of course, you’re thinking, "He can play anything he wants," but the way he comes across is the ultimately humble, self-deprecating guy.

So I saw that as a moment to try and put myself out there and I said, "I’ve listened to versions of ‘Tulsa Time’ that you played on and I was thinking of an arrangement that went something like this." … And I got to sit down at his setup and played a part, which was very Leon-inspired, in the part that he had played. And I think that was the moment when I looked up at Leon and he looked down at me and said something along the lines of, "All right, Taylor. I think that will do. I’ll see you tonight."

And was the performance itself everything you had hoped for?

It really was special, and in whatever tiny way, we were in the "Leon Story." … That was a moment, obviously for Tulsa music, and that’s a cool thing to have some old and some new and some in between get to play on stage, but personally, playing with him, all of us just had smiles from ear to ear. … Just because it’s the reason you kind of keep grinding away. You wait for moments where you get to combine your enjoyment of making music with your ability to still be a fan. Maybe you’re on stage, but you’re looking over and going, "Wow. It’s really like I’ve got a front-row seat to greatness."

Hanson performs "Tulsa Time" with Leon Russell in Tulsa in 2008: