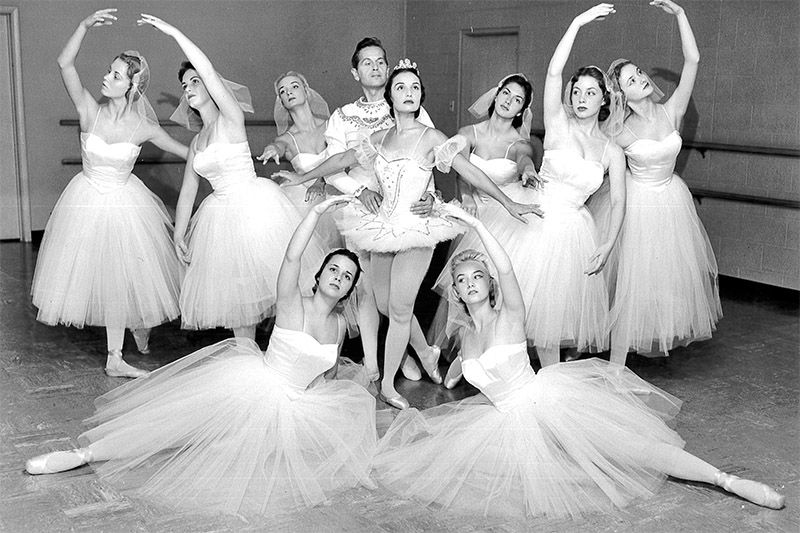 Roman Jasinski and Moscelyne Larkin, center, with Tulsa Civic Ballet dancers in 1956 for the company’s first performance of the snow scene from “The Nutcracker.” 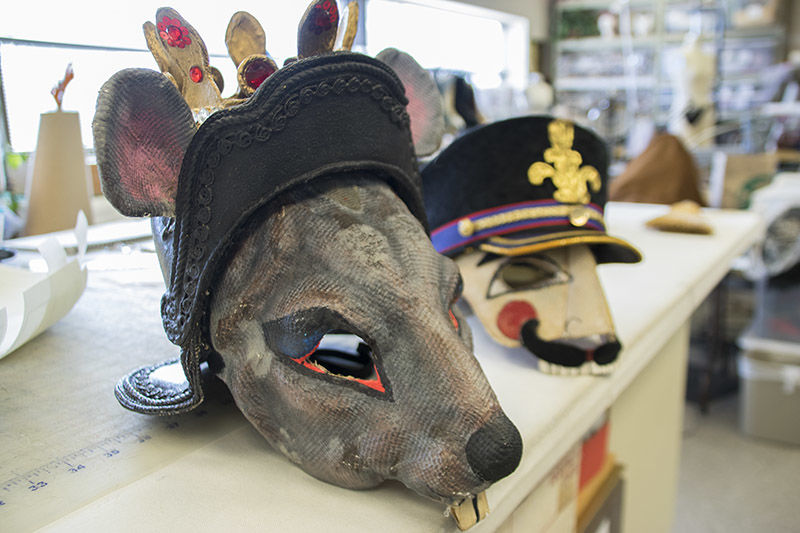 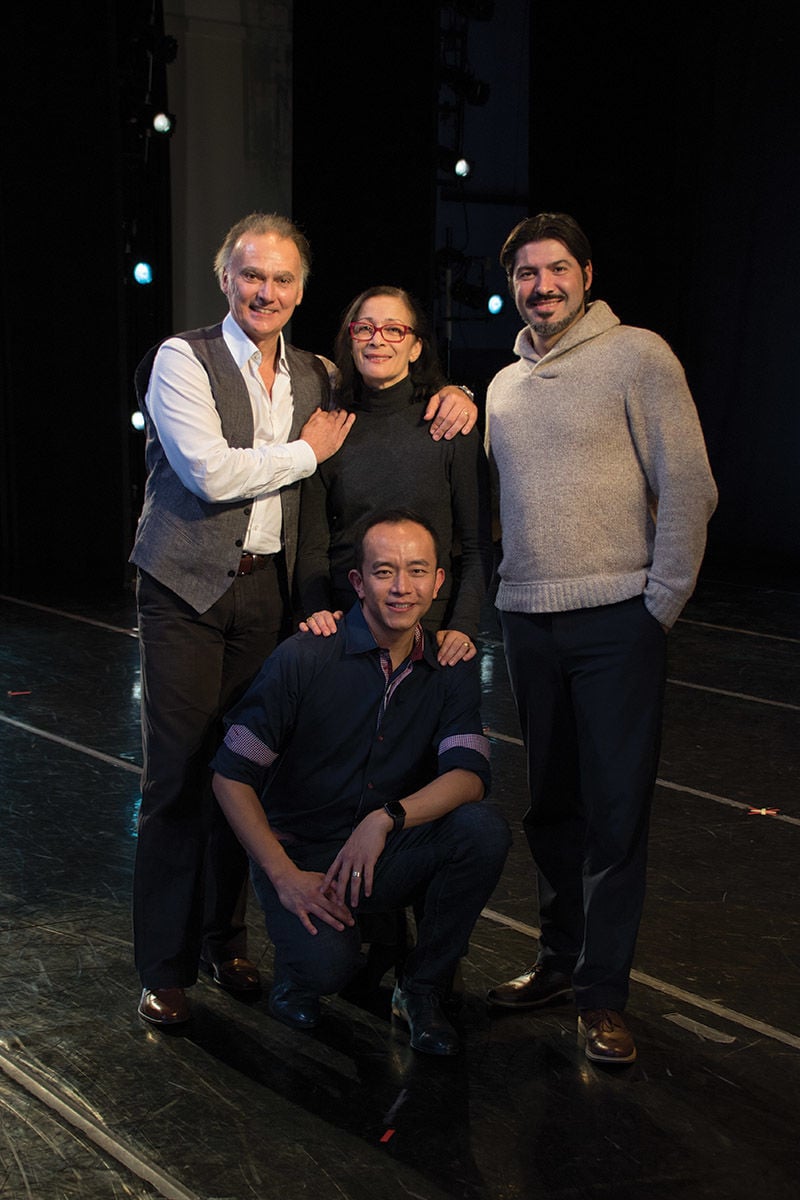 Ballet is an alchemy of past, present and future, a world made of both reality and dreams. It’s no wonder “The Nutcracker” — that magical land where girls become dewdrops, dolls become princes and flowers can waltz — is such an iconic ballet around the world.

This month marks Tulsa Ballet’s 50th year of sharing this classic work with the community that has supported its astonishing growth. Today, as in its beginnings, its “Nutcracker” is a winter flame at the center of a living legacy.

“The Nutcracker” wasn’t seen in America until 1940, when the Ballets Russes de Monte Carlo brought an abridged version to the U.S. On subsequent tours, the company introduced cities across the country to the ballet, which was originally choreographed in 1892 in St. Petersburg.

One of the dancers often cast as Clara on these tours was a fiery Shawnee-Peoria teenager from Miami, Oklahoma, named Moscelyne Larkin.

When Larkin and her husband, premier danseur Roman Jasinski, settled in her native Oklahoma in 1954, they had little to work with.

“They knew no one, and they had no money,” says Georgia Snoke, Tulsa Ballet historian and an original member of the Tulsa Civic Ballet (as the company was first known). She has been training “Nutcracker” children for 44 years.

What the couple had were steps and traditions and a devotion to their art learned directly from the great European ballet masters. What they had, in part, was “Nutcracker.”

The ballet’s famous Snow Scene was part of the first program presented by the new Tulsa Civic Ballet as part of the Celebrity Series at Congregation B’nai Emunah on Dec. 15, 1956. Larkin and Jasinski danced the principal roles, with 16 local students as the corps de ballet.

The Snow Scene also appeared in the first full performance by the company in March 1957. “We did ‘Nutcracker’ things in the basements of churches, on tennis courts, quick little vignettes,” and not necessarily at the holidays, Snoke says. It wasn’t until 1969 that, as Tulsa Ballet chief historian and archivist and former Tulsa Ballet dancer Cheryl Forrest recalls, “Miss Larkin announced we would be doing a full-length ‘Nutcracker,’ and we all got big eyes.”

That performance, at the Tulsa Municipal Theater (later named the Brady Theater and now Tulsa Theater) on Dec. 13, 1969, was a landmark for Tulsa Civic Ballet. It had become a company of 30 dancers, paid in pointe shoes.

Fifty children and 24 students filled out the cast. And instead of performing the leading roles themselves, Forrest says, “Mr. Jasinski just called George Balanchine (his former colleague at the Ballets Russes) and asked, ‘Who can you send me?’ And every year Balanchine would send the new stars of New York City Ballet, who were eager to learn the old Ballets Russes roles.”

“Those dancers were very surprised to find true ballerinas in Tulsa,” Snoke says. “We were never onstage without being rehearsed to within an inch of our lives.” In fact, many locals in that original cast went on to professional careers in dance, including a young Roman L. Jasinski, the son of Larkin and Jasinski, who would go on to become Tulsa Ballet’s artistic director.

Forrest recalls the audience for the first “Nutcracker” was full and enthusiastic, despite the bag of “snow” for the Snow Scene ripping before the scene began. (The dancers had to navigate notoriously speedy choreography on a stage covered with slick white confetti.) The Christmas tree was made like a Jacob’s Ladder and grew with a clacking noise. The original backdrops were painted at the Central High School drama department. And the parents in the party scene? Gym teachers from Tulsa Public Schools.

“To premiere the first ‘Nutcracker’ here was really special,” Forrest says. “And think where it has led.”

By 1978, company members were performing the principal roles themselves, and 1979 brought a lavish new set by Jay Depenbrock from Cincinnati. With its growing Christmas tree and pearly pink Sugarplum kingdom, that set formed the iconic backdrop of the Tulsa Ballet “Nutcracker” for more than 30 years. The costumes traveled with the company on its annual winter tours throughout the region in the 1980s and ’90s. During the 1988 tour alone, a record-breaking 43,000 people saw a TB “Nutcracker” performance.

Not long after Marcello Angelini took the helm as artistic director in 1995, it was clear something would have to be done about the costumes and sets that had worked so hard for so long. “They were falling apart. It had reached the danger point,” Snoke says. “And ballet had moved on. The Jasinski ‘Nutcracker’ had been seen here for almost 35 years — and ‘Nutcrackers’ don’t ever run for 35 years.”

As the Jasinskis had done throughout their active years, Angelini began to make changes to the production based on both practical and artistic considerations. Angelini remembers reworking the battle scene, cutting the seven-headed Mouse King — “in favor of a smaller headpiece that actually let the dancers dance,” he says — and a bit of the snow pas de deux. He also re-choreographed the Russian dance and modified the grand pas de deux in Act Two.

In time, it just made sense to let it all be new.

“The original production was fantastic,” Angelini says. “We had a choice between refurbishing everything for $400,000 or creating a new production for the same amount. It was my choice to take the risk and introduce something different.”

Angelini’s “Nutcracker” premiered in 2003. His version was trimmer than the traditional two-plus hours to make it more accessible for families with young children. Set in 1920s Paris, the ballet “was more about love than about Christmas,” Angelini says, “because when there’s love in your life, it’s always Christmas.”

There were other changes; for example, Clara was now Marie, the name chosen by author E.T.A. Hoffman in “The Nutcracker and the Mouse King,” which was Angelini’s starting point in creating the storyline for this work.

It was, says ballet mistress and former Tulsa Ballet dancer Susan Frei, “a big transition, especially for those who knew the old version well. People coming in fresh off the street, or who were tired of the traditional version, accepted it more easily.”

“The mistake I didn’t want to make was creating a production that would be obsolete in a few years,” Angelini says. “I knew whatever I did had to be forward looking in order to stay relevant a decade or so later. Also, our philosophy as the company is we would rather make something that is ahead of its time, and let the arts scene catch up with it, than just something that has no effect on the community.”

He reworked the production after the 2003 premiere, boosting its Christmas spirit, but fundamentally it remained the fresh look at the world of the “Nutcracker” that he first intended, with its prismatically refracted dream sequences, glamorous real-world scenes and choreography that closed the gap between the traditional and the current.

Audiences took to the new approach. For the past five years, the production has broken ticket sales records every year.

“My desire was to keep Tulsa connected to the rest of the world and keep people excited,” Angelini says. “Also to introduce people whose only experience of ballet is ‘Nutcracker’ to a wider range of what dance is, so they leave the theater saying they want to see another ballet.”

Angelini had other goals, too. “Part of the purpose, especially for the male contingent of the company, was to challenge the dancers, see how they are developing,” says ballet mistress and former Tulsa Ballet principal dancer Daniela Buson. She, resident choreographer Ma Cong and TBII Artistic Director Alfonso Martin all performed in the premiere of the Angelini “Nutcracker.” They all agreed the new choreography — particularly the partnering — is incredibly demanding.

“(Angelini’s) standards are so high,” Cong says. “Even after 10 years of dancing this ballet, we still found it exciting and challenging.” Martin agrees, laughing, “That was his point: that we were going to work!

“It was nice to have a new ‘Nutcracker’ set on a group of dancers who came at the end of one era and all started in a new direction together,” he continues. “To live the process at that time was wonderful.”

After 16 years, the production’s Italian-made and Italian-designed sets and costumes, designed to last a decade, have finally begun to fade, and the company is planning to bring Tulsa a fresh “Nutcracker” yet again: a new production by Cong and New Zealand designer Tracy Grant Lord, his collaborator on 2018’s “Tchaikovsky: The Man Behind the Music.” The company anticipates a 2021 premiere.

“Ma has done both productions, so he instinctively understands our goals and the community here in Tulsa,” Angelini says.

The coming change is practical, too. “Just like I did when the Jasinskis’ production needed to be freshened up, I looked at numbers, and the costs of refurbishments are similar to those of building a new production,” Angelini says. “Thus the decision to make it totally new. Once you rebuild every backdrop and every costume, you might as well change the choreography and get a fresh new look of this holiday classic.”

What kind of “Nutcracker” can we expect next? One with the same deep bow to the past and focus on the future that have made magic through Tulsa Ballet’s “Nutcrackers” over the past 50 years. “We are definitely going toward the more traditional imagery and storyline,” Cong says, including roles for children. “But we’re going to step forward at the same time. For me, these are the keys: family, love, passion, holiday spirit — and it absolutely has to be magical.”

Angelini often reminds people the company stands on the shoulders of giants whose capacity to inspire through dance continues to amaze. “We have a massive responsibility to make sure the company goes where (Miss Larkin and Mr. Jasinski) saw it going,” he says. “I hope they like the new ‘Nutcracker. I know they are around.”

'Nutcracker' by the numbers

When I was 12 and 14 I was the Sugar Plum Fairy in school productions. My daughters and I have been going to Tulsa's Nutcracker for almost 25 years. My youngest daughter preformed in 5 seasons. 1995-1999. In 1999, (being her last year to try out) she wanted to end with making the "Party Scene" and she did. Now I am taking my granddaughters, 3rd year for 7yr old, first for 3yr old. My daughter which danced in the Nutcracker will be taking her two daughters 3 and 5 for their first time. 3 generations to enjoy 3 different and wonderful choreography performances.