Bill Blankenship and Allan Trimble grace TulsaPeople’s September 2000 cover, staring intensely at one another as they arm wrestle ahead of the Union and Jenks rivalry game. Sadly, Trimble — Jenks’ former head coach — died in 2019 after a three-year battle with amyotrophic lateral sclerosis (ALS). Before retiring in 2018, Trimble coached the Trojans to 13 state titles.

“Coach Trim and I shared a magical time in high school football,” Blankenship says. “We enjoyed a friendship beyond the game that brought us together.”

At the original article’s publication, Blankenship’s Redhawks had yet to win a championship title; however, just two short years later, his 2002 team took home the title over Broken Arrow.

Since Blankenship’s cover appearance, he left Union in 2005, moved to the University of Tulsa, and eventually took over as head coach there in 2011. He stayed at TU for another three years before taking a position at Fayetteville. Now he’s back and in his sixth year as head coach at Owasso.

With his position at Owasso comes a fun, yet challenging twist: Blankenship’s son, Josh Blankenship, is head coach at Broken Arrow High School — a recurrent opponent vying for the Oklahoma 6A Division 1 State Championship as well.

“I think it’s lost on most people how families of coaches ‘live and die’ with every win and loss in every season of our coaching life,” he says. “Someone is going to lose the game and either you or someone you love and their family is going to be devastated." 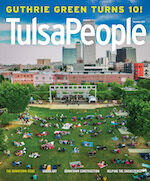