Sapulpa native Joni Rogers-Kante remembers when the idea struck her. She was in her 30s, recently divorced and living with a friend. One day, as she held her son, she was inspired.

“You know when you hold babies and they play with your face, and if you have makeup on, they mess up your makeup?” Rogers-Kante says. “I thought, ‘Why in the world can’t someone create products that stay put until you take them off?’”

She got to work on a business plan.

“I had absolutely nothing to lose, so I set off to take classes and meet chemists from Europe and all over the United States,” says Rogers-Kante, now 62. “I eventually found someone who could create what I described, and that’s how we started.”

SeneGence launched in 1999 with LipSense, a long-lasting liquid lipstick. Today, the skincare and cosmetics company has offices in five countries, thousands of independent distributors and approximately 40 employees in Oklahoma. Though the products are not produced here, orders are fulfilled from the company’s Tulsa warehouse.

Rogers-Kante grew up on a Sapulpa farm before moving to California when she was 15. Decades later, she missed the community in Oklahoma.

“I started thinking about where I ultimately wanted to retire, so that’s what motivated my husband and I to come out and buy some land,” she says of the ranch they purchased in 2016. “The more we thought about it, the more sense it made to move our company here. Frankly, I just trust the people here and their work ethic.”

The couple now splits their time between their Oklahoma ranch and their home in Southern California.

Rogers-Kante later acquired 300 acres next door to her Sapulpa home to establish SeneGence’s corporate campus, a process that began a few years ago. She also bought nine buildings in downtown Sapulpa, including the Burnett Mansion, built in 1911 for oilman Bates B. Burnett. A grand reopening in October marked the building’s newest chapter as home of SeneGence’s nonprofit, the Make Sense Foundation, which raises funds to support organizations that focus on helping women and children in need. 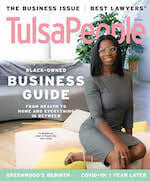