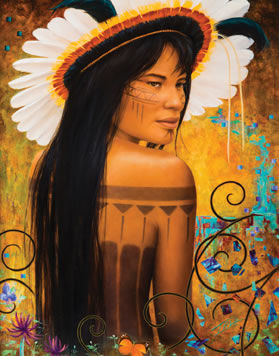 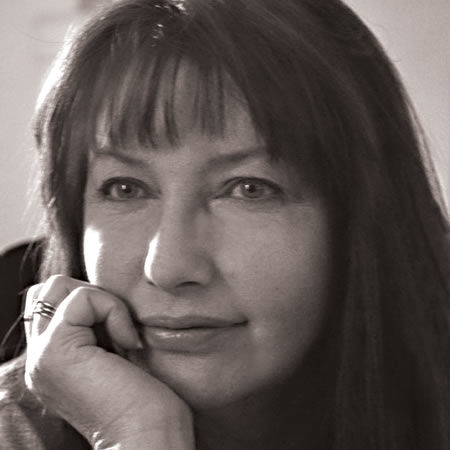 From her childhood, Cherokee artist Sharon Irla recalls her mother’s sewing room and the handmade quilts and painted Mrs. Butterworth’s syrup bottles created by her grandmother. Both women influenced Irla’s career, first as a muralist and trompe l’oeil artist, and currently as an oil painter inspired by her Native American ancestry and culture.

Irla will be featured at the Cherokee Art Market later this month at the Hard Rock Hotel & Casino in Catoosa. She has participated in the event since 2007.

How long have you been an artist and who influenced your career choice?

My professional career as a commercial/digital artist began in the mid-’80s and continued for the most part until the late ’90s, when I began working as a muralist/decorative artist in the Dallas area. In 2003, my artistic focus turned to fine art oil painting and Cherokee or Southeastern Native American culture as my subject matter, which is what brought me back to Oklahoma. Without a doubt, my mother was the most influential. She was very creative and sewed beautiful clothing for her female clientele, as well as for my sister and me. Her work area was full of fancy fabrics and sketches of beautiful women. It was a favorite place to hang out.

Are you from a family of artists?

Aside from my mother, there are several artistically talented family members. My grandmother did a lot of folk art and displayed it in her home and garden. I think her painted Mrs. Butterworth’s bottles and her beautiful quilts were some of my favorites. I don’t remember her ever selling them.

Excluding murals, roughly 40, give or take. Some murals have taken several months because they were either very large and/or done in the trompe l’oeil style, which means "to fool the eye," so they have to look very believable and take much longer to paint. On average, my paintings take two to three months to complete, unless I also make a custom-designed frame for it, which can add another three weeks or so.

Where do you get your ideas for art pieces?

(Inspiration) can shower you in a matter of seconds or simmer on the back burner for years until the last ingredient comes along. Much of my work is influenced by my Cherokee heritage, so, in that sense, there are many bread crumbs along the way, but (it) doesn’t always result in a painting about Cherokees. For instance, the painting "Save Xingu" speaks to the environmental destruction and genocide that is happening to South American tribes. As an indigenous American, it’s not hard to relate to their plight. But … a close-up photo of Chief Raoni’s aged but courageous eyes … moved me to tears and inspired the painting. The emotion marries the ingredients in the pot. But inspiration is everywhere. The heart tells us what to zero in on.

Where do you paint, and where can your works be found?

I work out of my studio based in (the) Cherokee Nation. The best place to see where my works are being exhibited is on my website, www.sharonirla.com.

Have you mentored young or new artists?

Yes, I hold workshops from time to time, and it always amazes me how anyone can paint with enough patience and the right techniques. But the goal of the workshop is not to have the students emulate my style of painting. Some of my students are artists in their own right and just want to add to their bag of tricks. The newbies will do that, too, as they develop their own style.