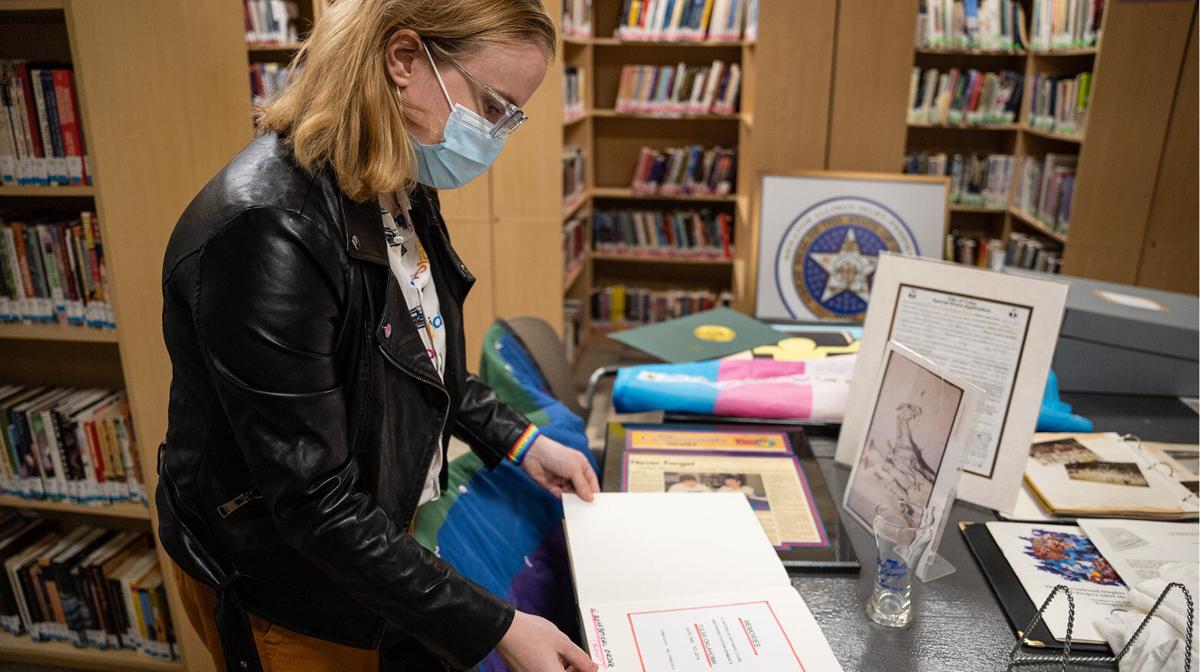 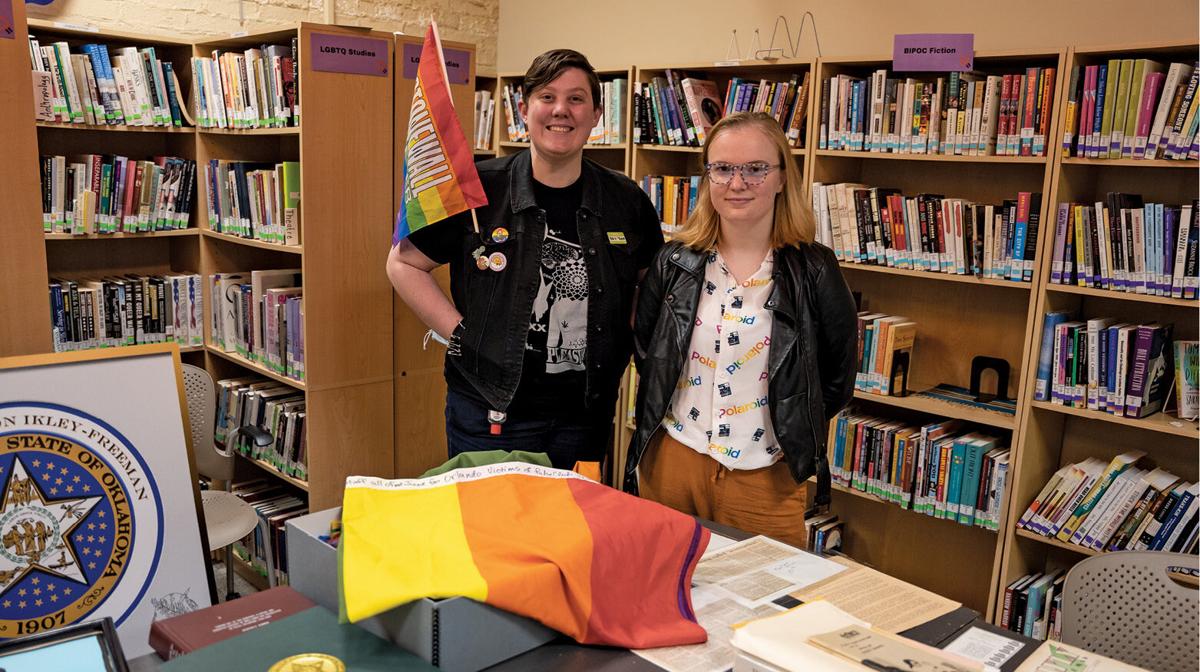 Even the door leading to where LGBTQ historical archives are stored in downtown Tulsa is a piece of history. It used to be the front door to the Dennis R. Neill Equality Center — until someone shot it with a pellet gun.

Tucked away off the library of the Equality Center, dozens of boxes fill shelves in the archive room. Inside, magazine and newspaper articles are sorted, along with Tulsa Oklahomans for Human Rights (the former name of Oklahomans for Equality) meeting minutes and memorabilia like quilts, balloons, posters and photographs.

“We’ve been an organization since 1980, but we have stuff like pictures of early gay cowboys and early bar culture,” Equality Center Director Morgan Allen explains. “I think that’s a big thing because, especially with COVID, we had a lot of bars close, but it’s really important to note the impact of gay bars on LGBTQ history in general.”

Allen is a former teacher and a member of the Oklahoma Archivists Association who is fervent about preserving history. “I’ve been (involved with OKEQ) since I was 13,” the 28-year-old says. “I’m so passionate about this work, that it just translates to being passionate about being a steward of the history.”

Patrons donate materials to the collection, Allen says. “They will have things like their personal scrapbooks. Jack Francis, he was an AIDS activist, had these scrapbooks of the NAMES (National AIDS Memorial) project.” The NAMES Project is known for “the Quilt,” a national endeavor that launched in 1987. Each 3-foot by 6-foot panel honors a person who died of AIDS. The Quilt started with 40 panels and grew to more than 40,000 by 1996. “When he passed, his loved ones donated this to us.”

The Equality Center’s historical archive was started decades ago by Tulsan Dennis Neill. When the internet grew in popularity, OKEQ volunteers began to scan materials to save digital copies.

Digitizing and making the archive accessible to the public online is a full-scale endeavor, Technical Coordinator Anna Puhl says. Organizing donations into a searchable archive is one key piece of the project.

“Our goal is to get everything cataloged in a way that is public facing, where people can understand what is in our collection and view it,” Puhl says. “In order to do that, we had to create a finding aid first before we even started scanning documents, so my main focus is making that finding aid.”

The process is an involved one, Puhl explains, starting with a detailed spreadsheet of everything in the archive. They are using that to build the searchable digital database by scanning the documents and photos. Shirts, flags and other physical items like the Donald Trump baby balloon saved from a 2020 protest are preserved in the archive with photos.

Even things that might be seen as mundane, like meeting minutes dating back to the organization’s inception, are fascinating to Puhl, 28, who recently has been archiving documents from decades of LGBTQ organization meetings. Puhl says the documents are enlightening.

“I’m seeing essentially every decision that has been made in this organization for the past 41 years,” Puhl says, adding that occasionally they come across an amusing note jotted in the margins, which is especially funny when it’s someone Puhl knows.

News clippings and other publications depict the evolution of legislation regarding LGBTQ life, as well as public perception of the community.

“We have newspaper articles from anytime the word gay or lesbian was mentioned in the Tulsa World, in a national newspaper pertaining to something in Oklahoma, anywhere, we have it,” Puhl says.

Allen says having multiple news sources side by side helps paint a more accurate picture of public perceptions in the past. Reading a story in a local or national newspaper shows a different view than reading something in “The Gayly,” Allen says of the Oklahoma City-based LGBTQ news organization.

“You can look at the same story and see the influence of the perspective, the different perspectives that people can have. And it’s important to have all the perspectives in here because if we don’t, we’re denying where we’ve come from.”

Another thing the archive team is working on: preserving oral histories of the community. Allen has planned history nights where members of the LGBTQ community share their stories with a group at the Equality Center, which are set to continue soon.

Puhl recalls when they bartended at a local LGBTQ bar, regular patrons would share personal stories. Puhl learned from firsthand accounts the impact the AIDS crisis had on gay individuals, their friends and their families, and stresses the importance of saving those voices.

“This is the thing that we get to do for our queer family who think they won’t be remembered — we have this place to memorialize them forever,” Puhl says. “We have a way of making them a part of our history because we lost so many people in the ’80s whose stories never got to be told. The people who are still alive who know their stories can tell them now, and we can have that forever.” 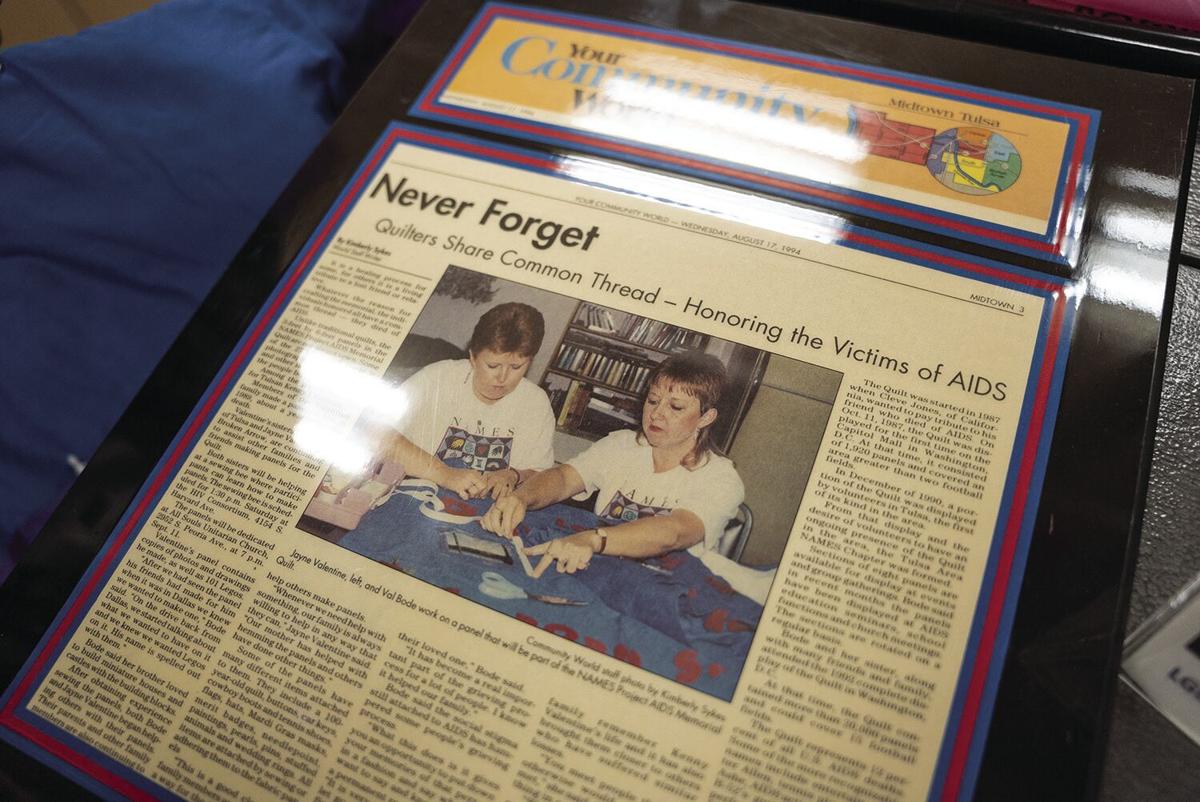 A 1994 article in the Tulsa World details Tulsans’ role in the national NAMES project. 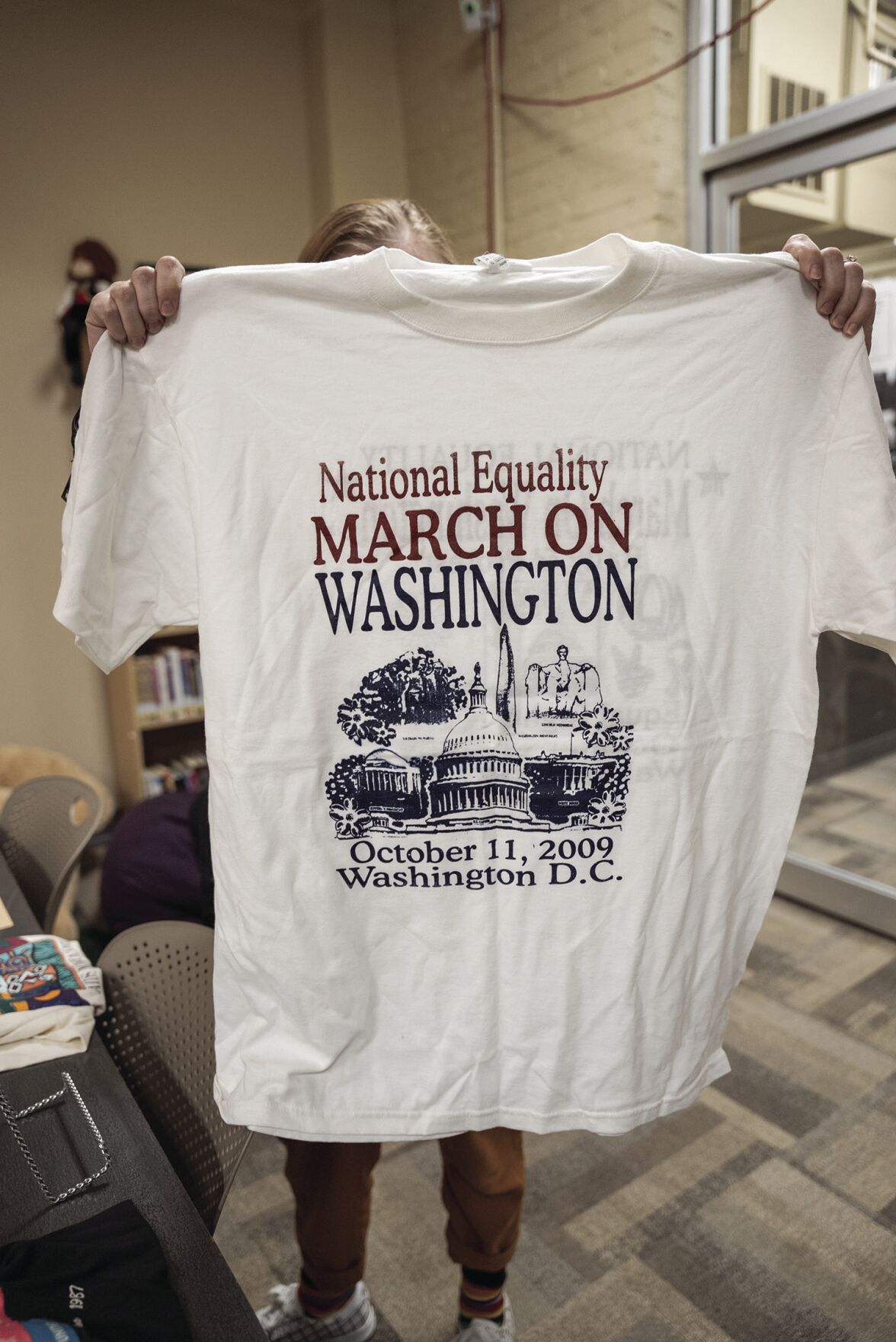 A T-shirt from a 2009 rally calling for equal legal protections for LGBTQ people. 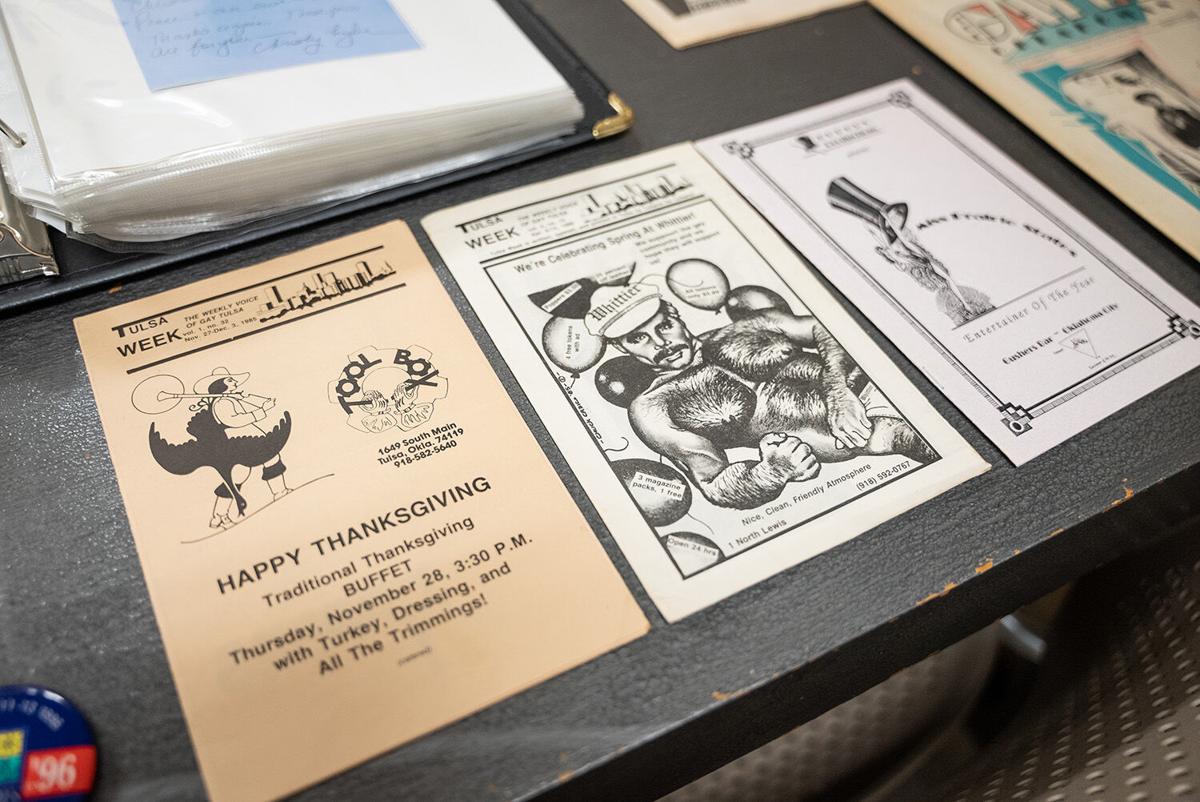 Old copies of The Weekly Voice of Gay Tulsa. 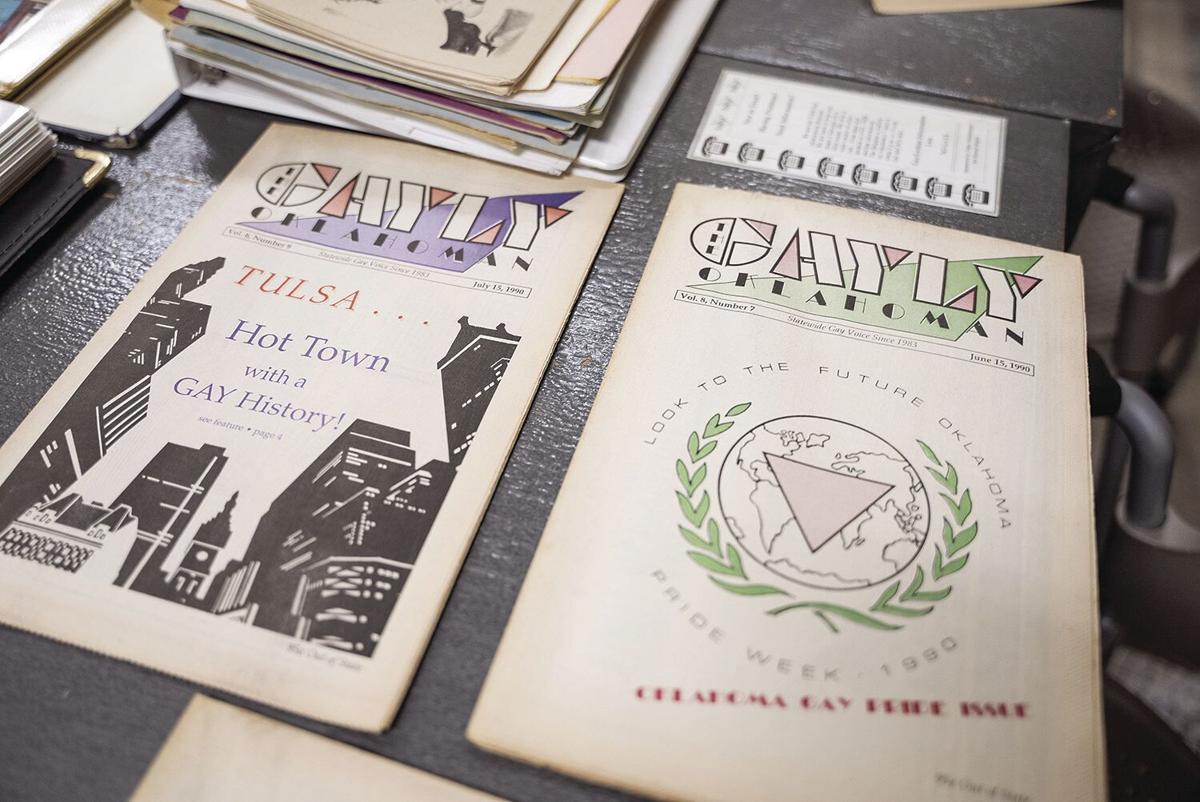 Print copies of “The Gayly” are available for viewing. 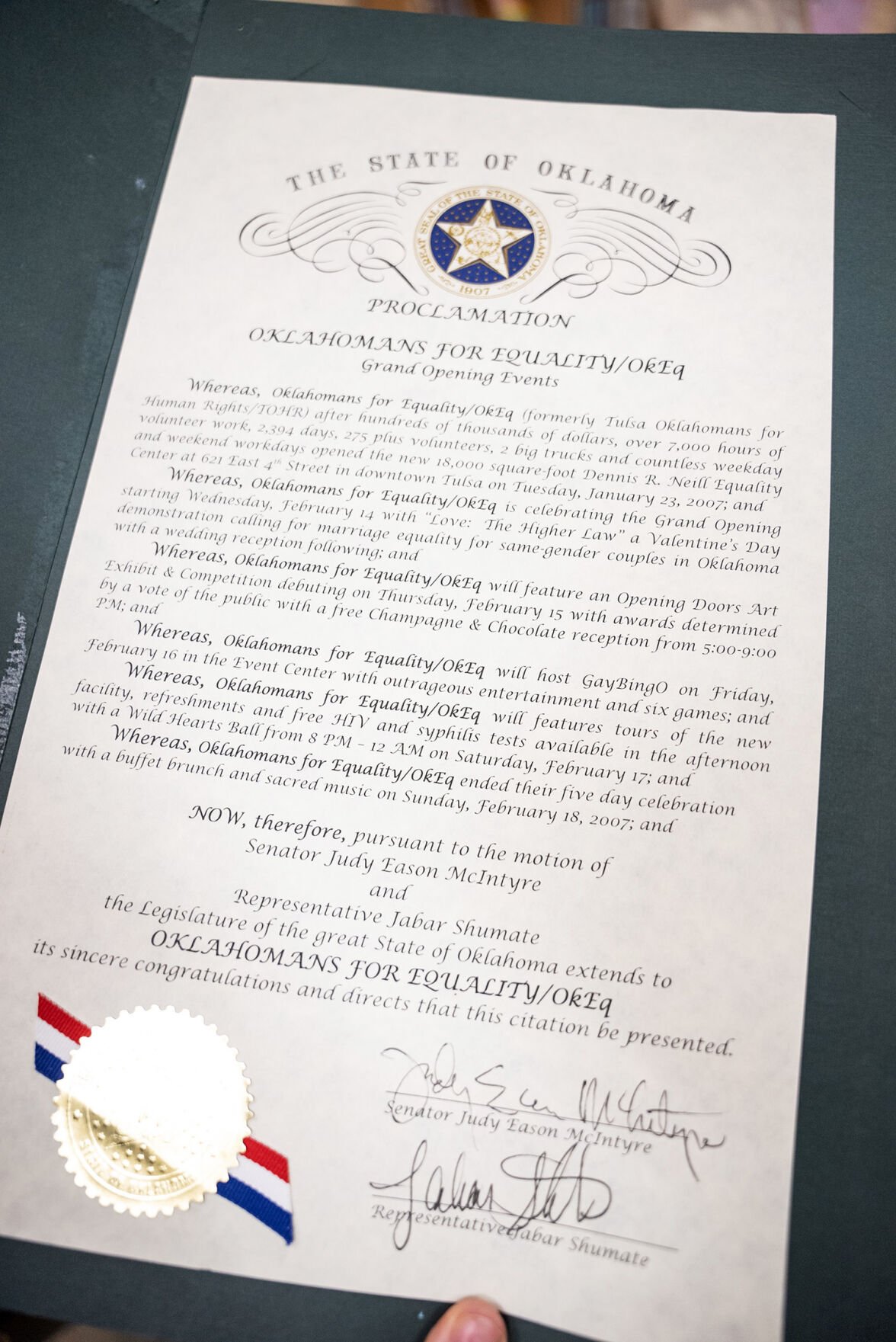 A 2007 State proclamation for Oklahomans For Equality's grand opening events. 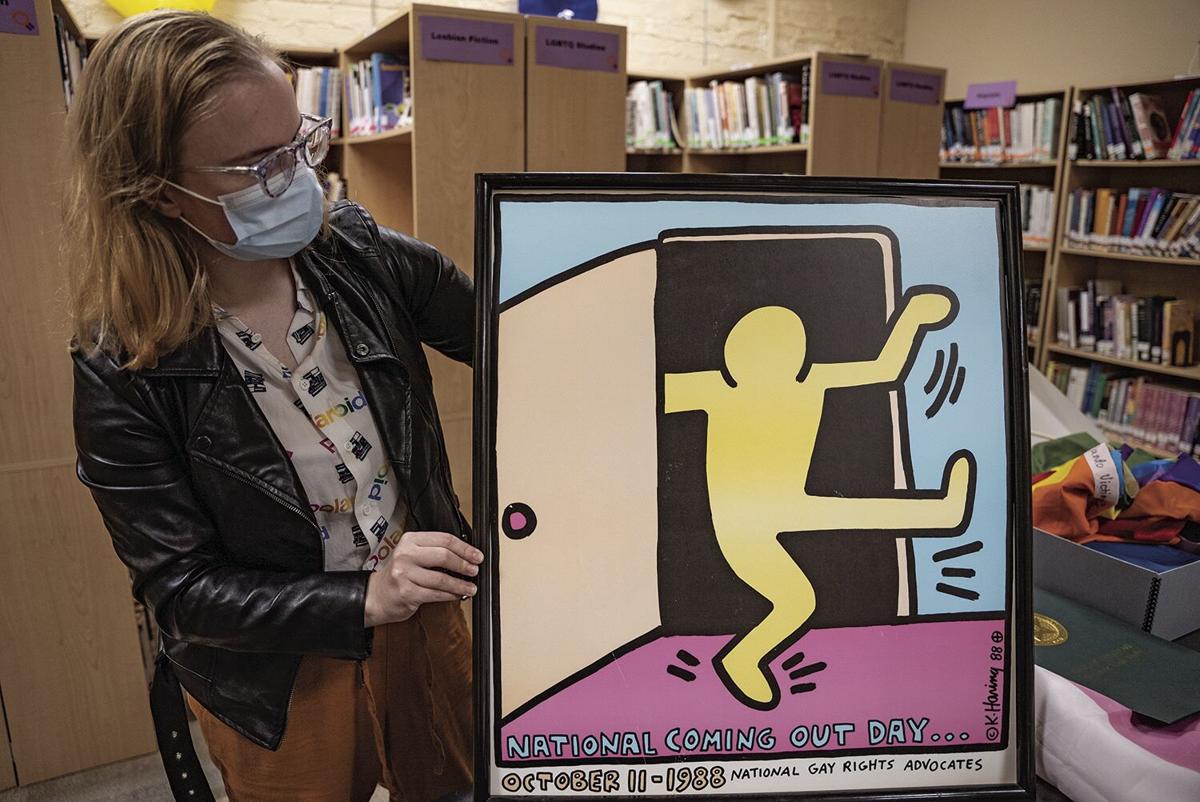 Morgan Allen shows a poster from National Coming Out Day in 1988. 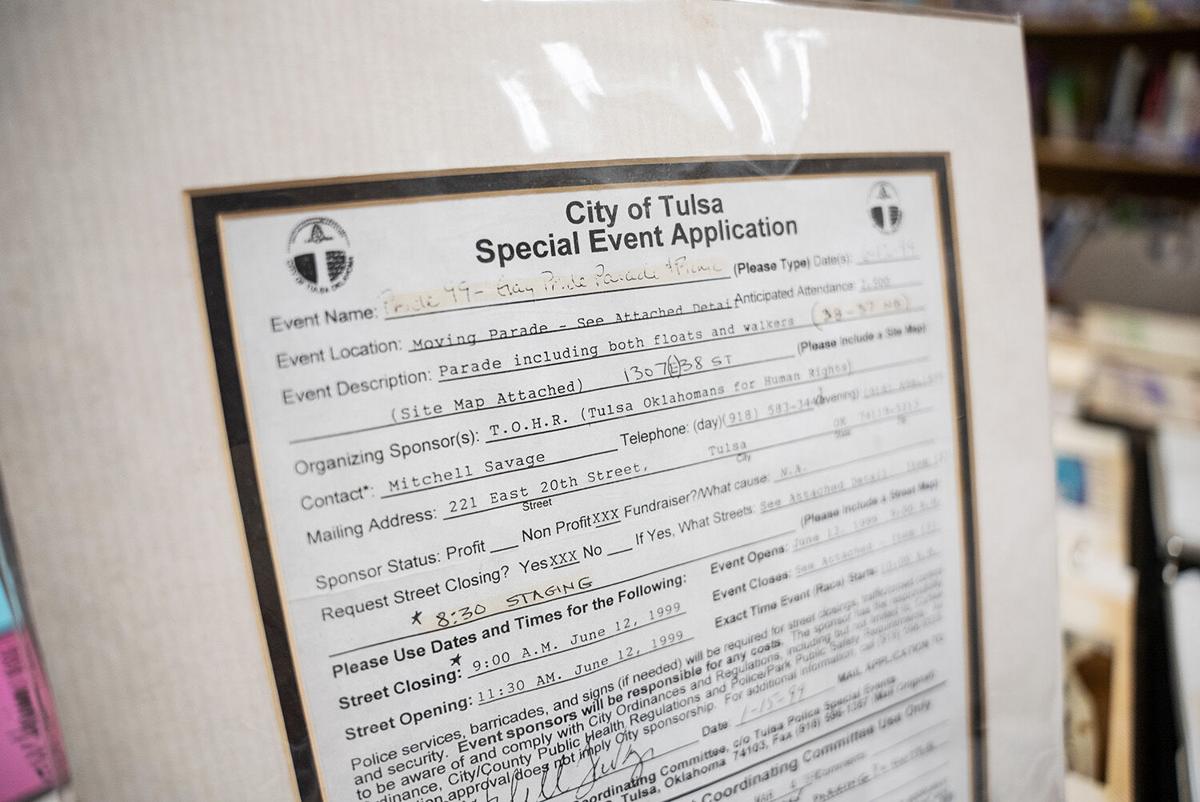 A copy of the City of Tulsa special event application for Pride 99.

A look at some of the items archived at the nonprofit center.

A 1994 article in the Tulsa World details Tulsans’ role in the national NAMES project.

A T-shirt from a 2009 rally calling for equal legal protections for LGBTQ people.

Old copies of The Weekly Voice of Gay Tulsa.

Print copies of “The Gayly” are available for viewing.

A 2007 State proclamation for Oklahomans For Equality's grand opening events.

Morgan Allen shows a poster from National Coming Out Day in 1988.

A copy of the City of Tulsa special event application for Pride 99.