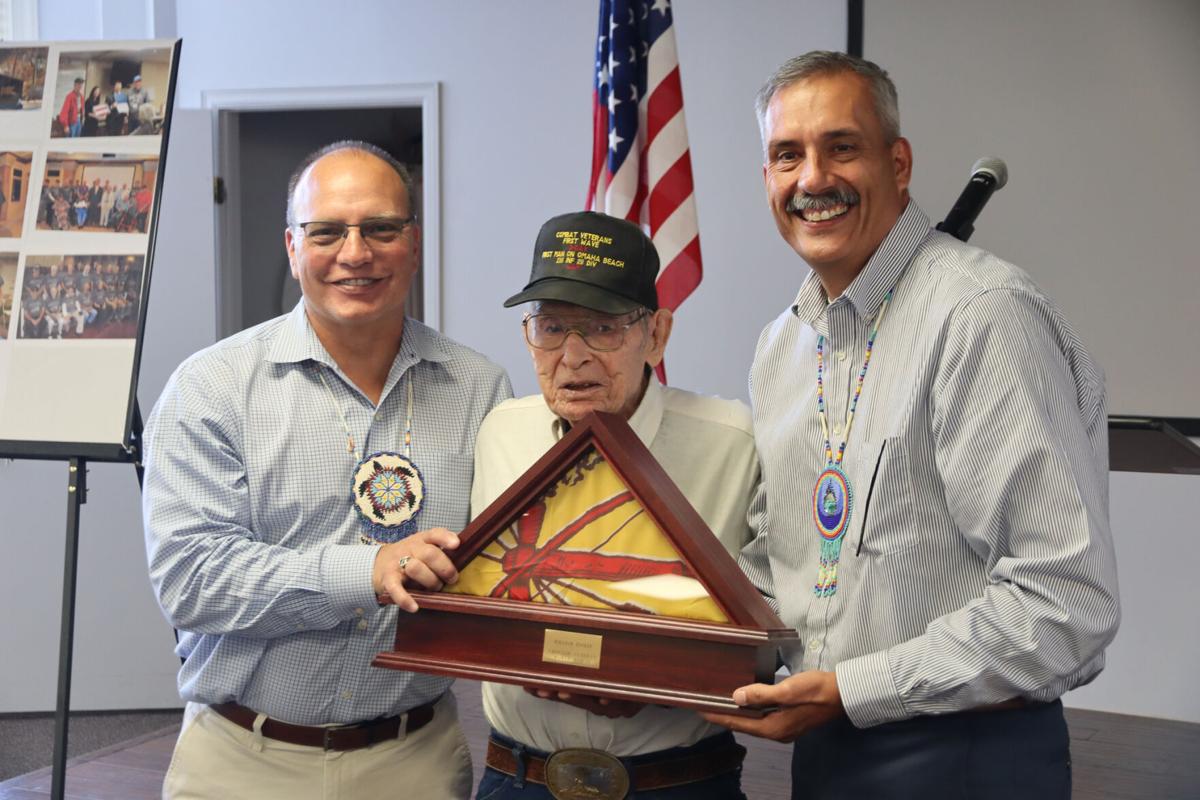 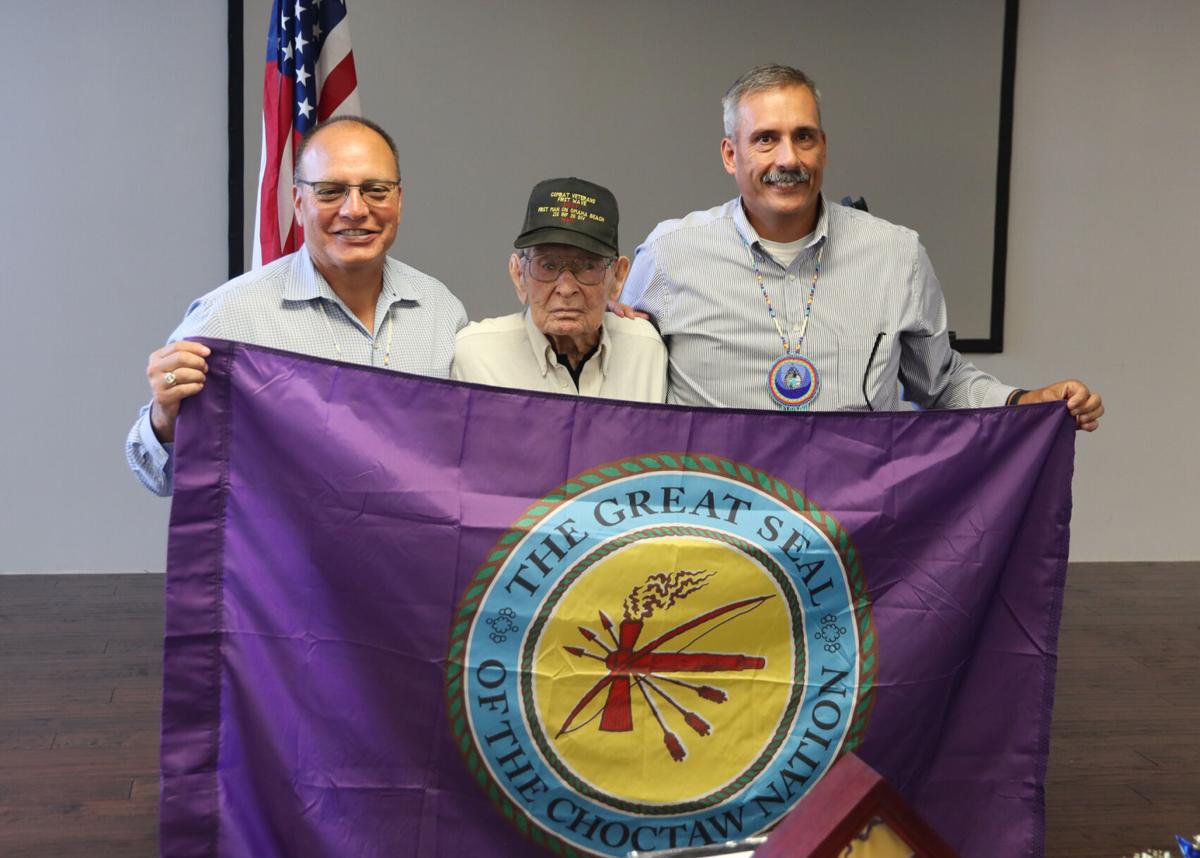 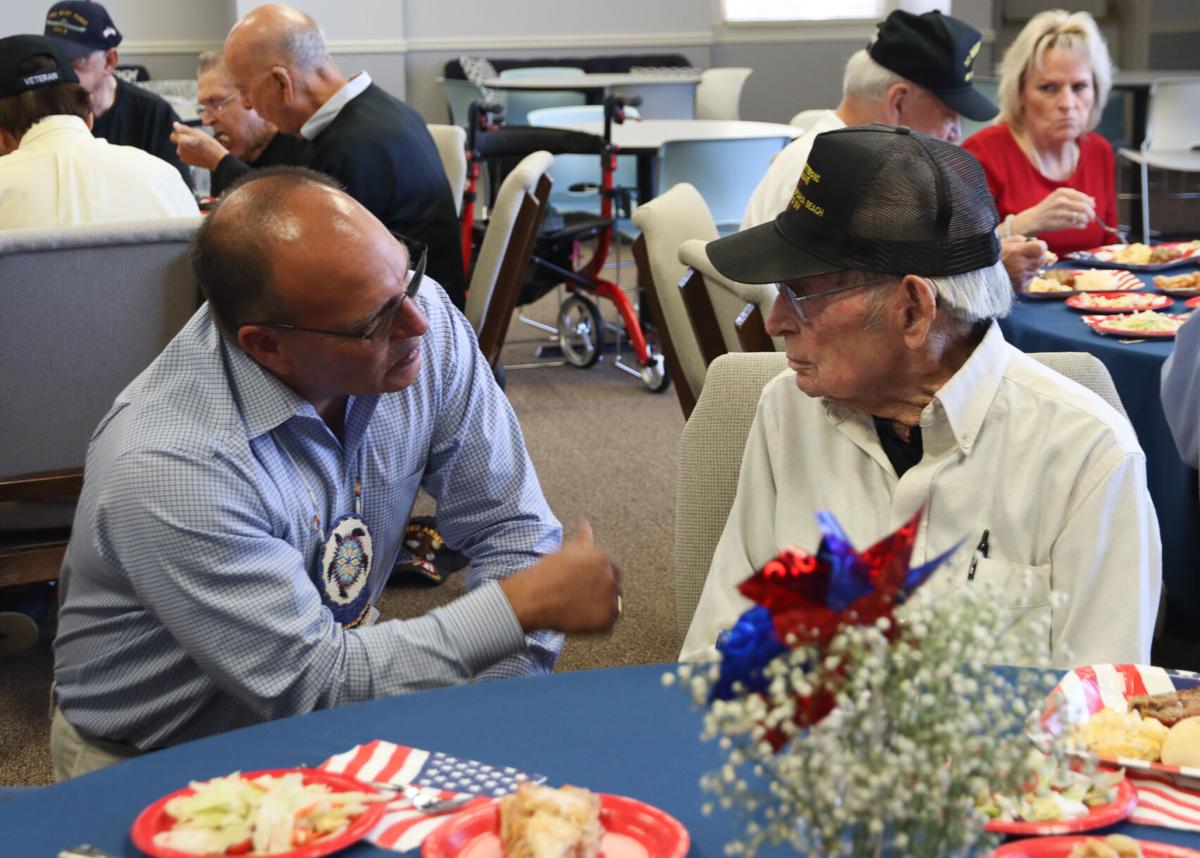 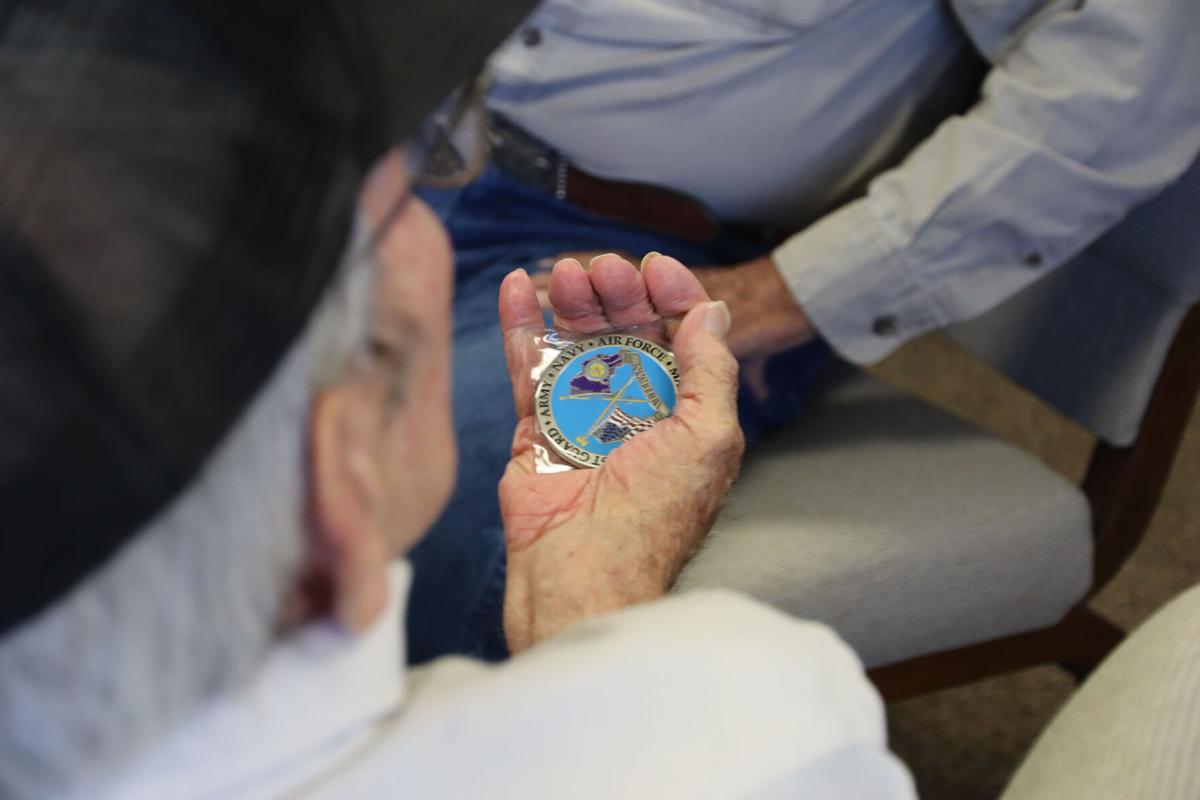 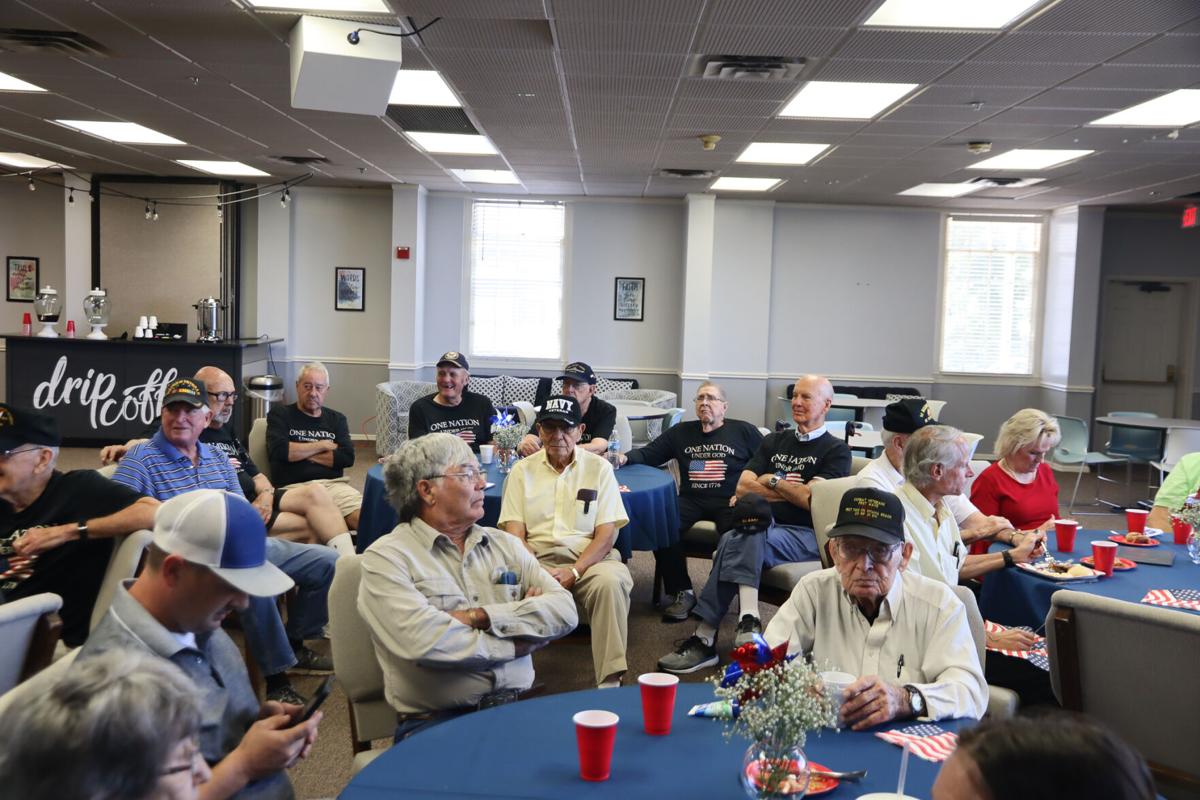 A special luncheon was hosted by All Veterans Association at Kirk of the Hills. Some of Parker's family and friends were also in attendance. 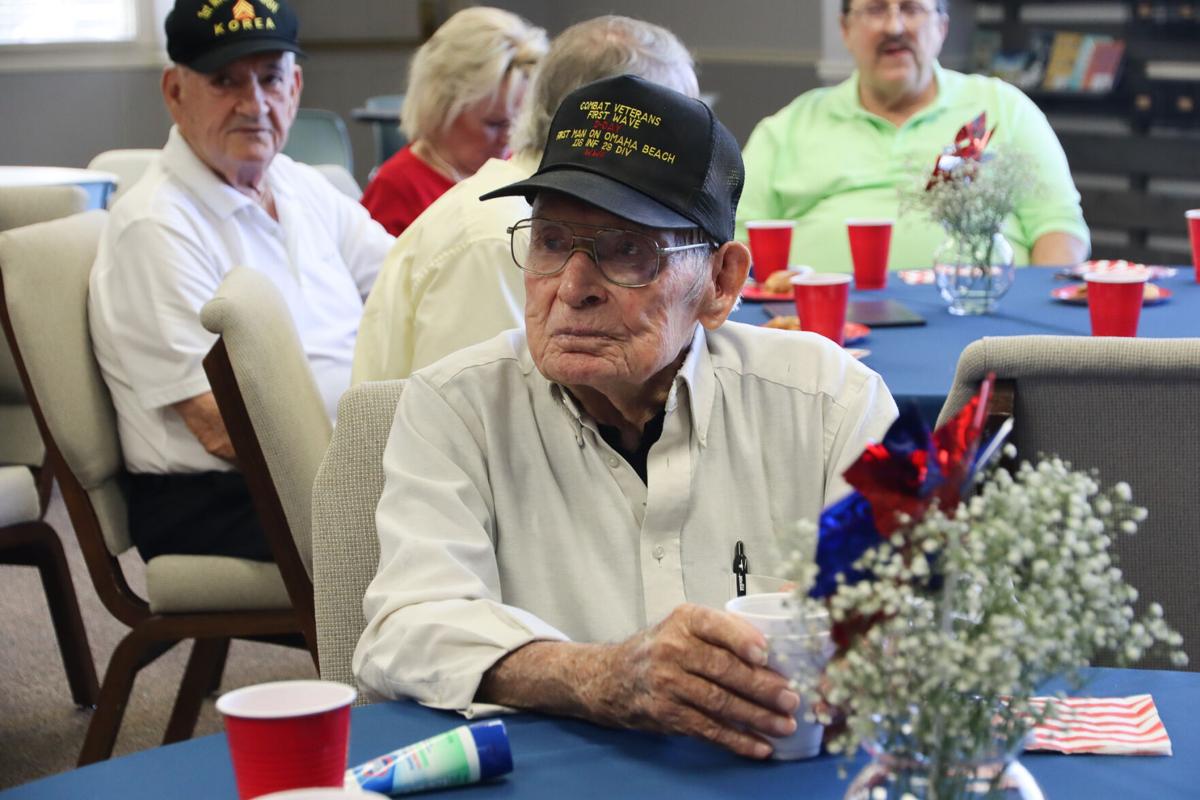 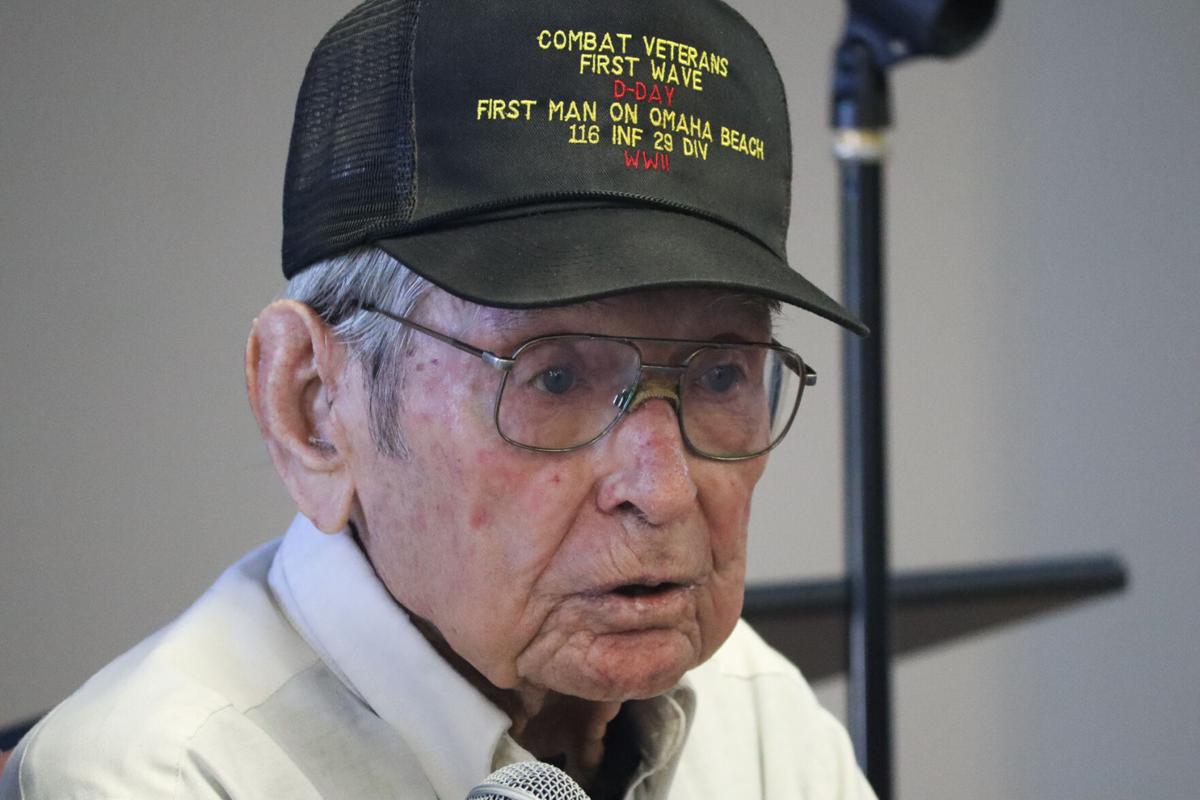 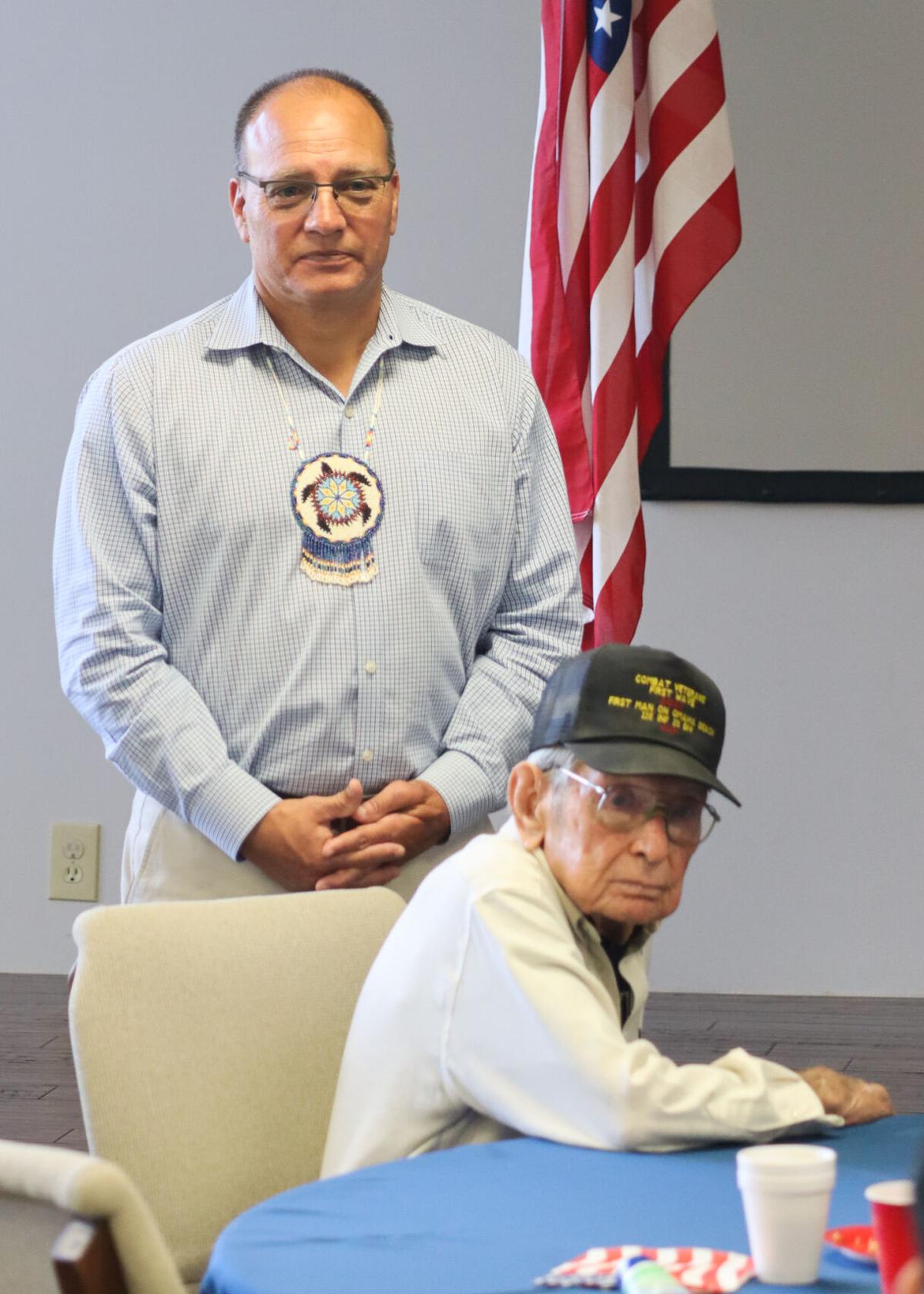 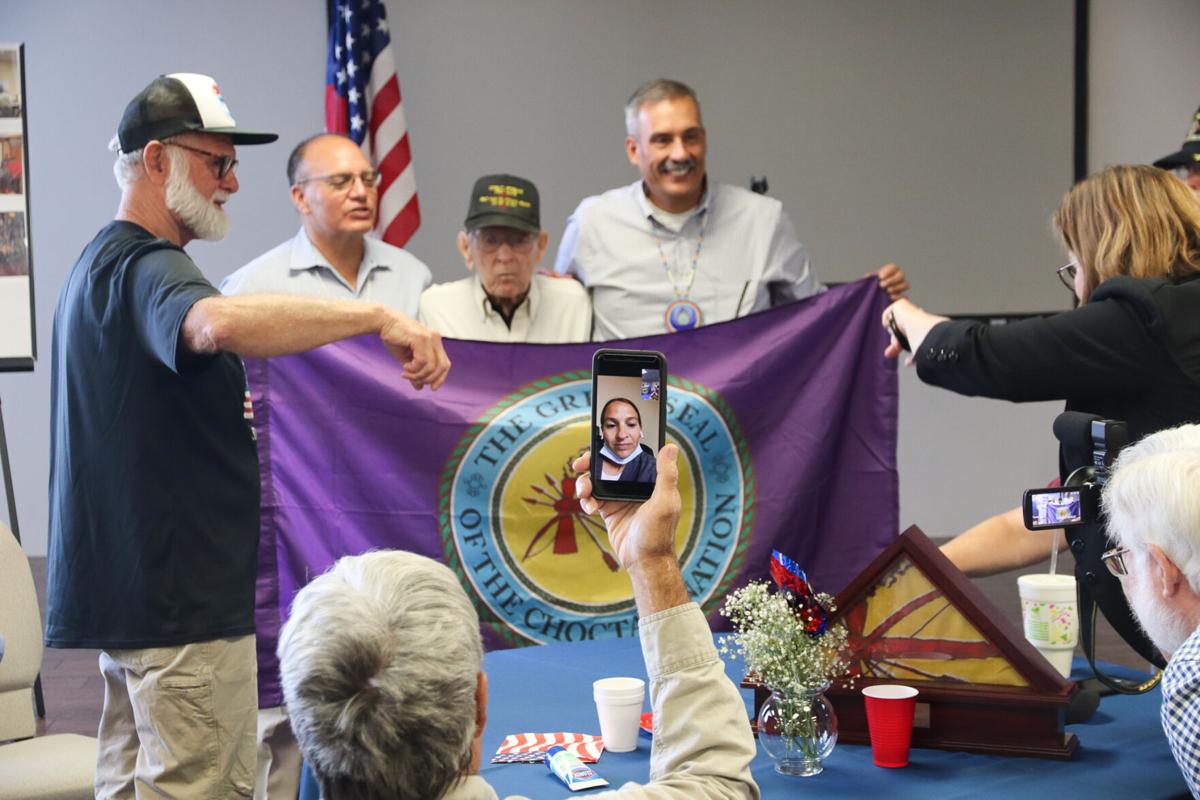 One of Bill Parker's relatives watches the presentation through Face Time. 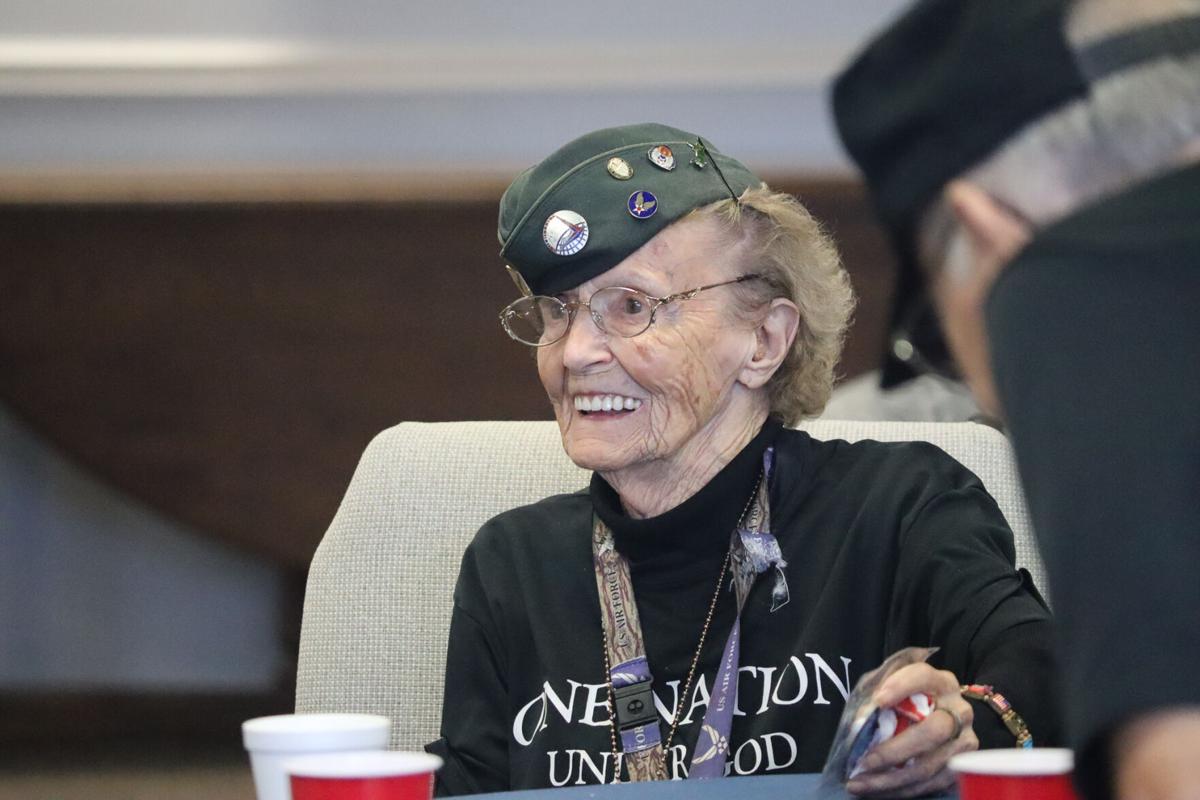 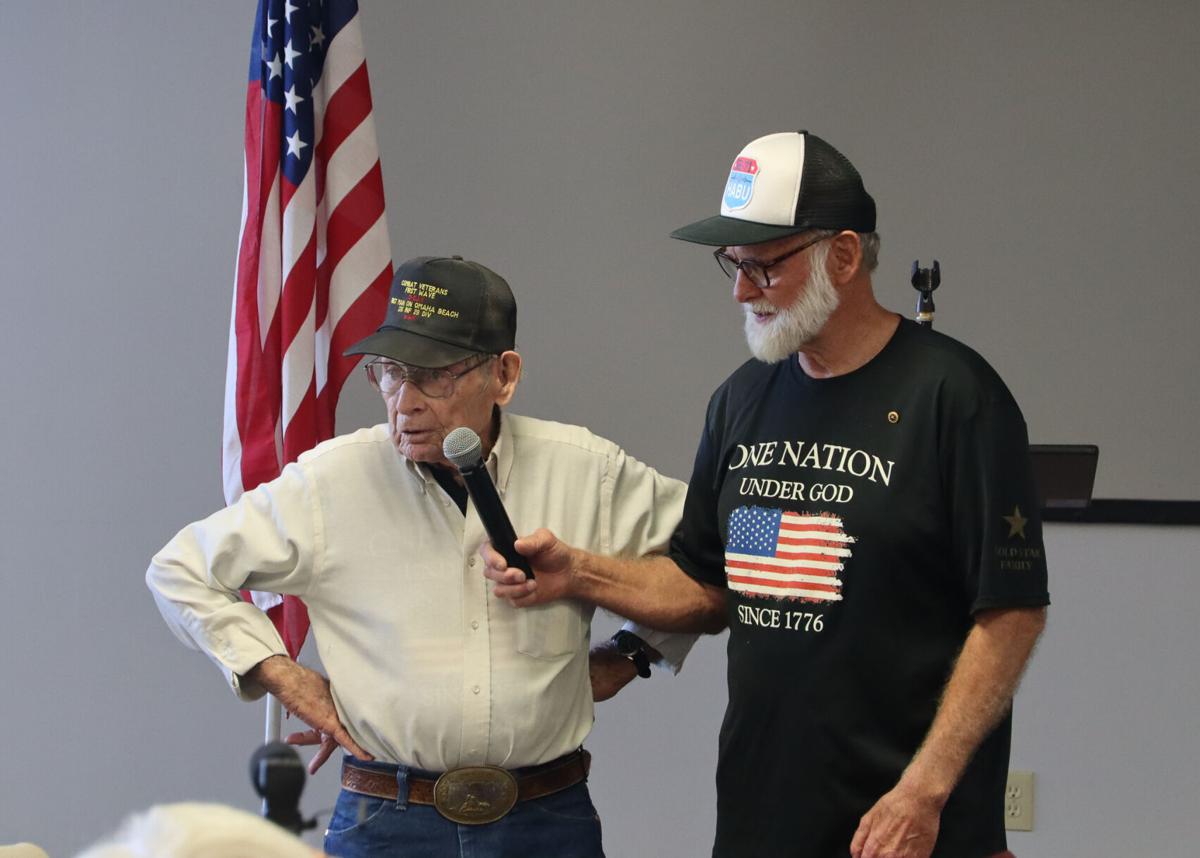 Bill Parker and David Rule of All Veterans Association 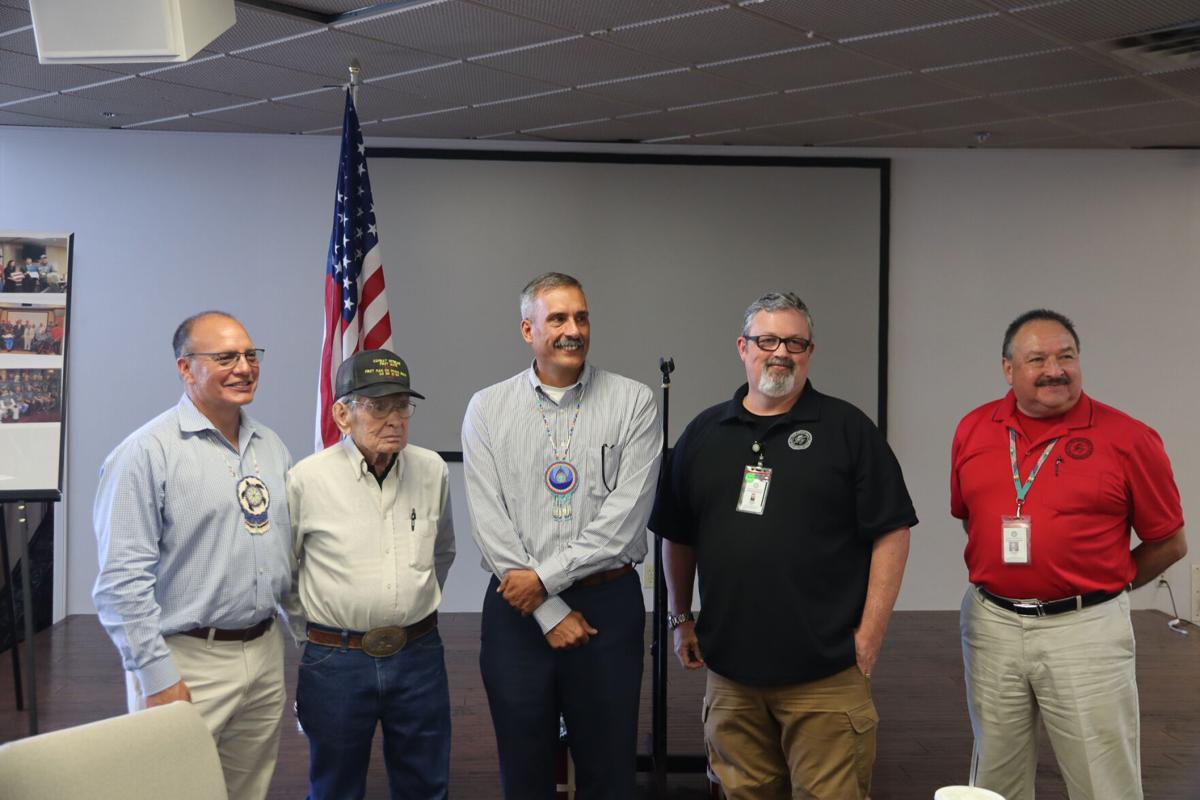 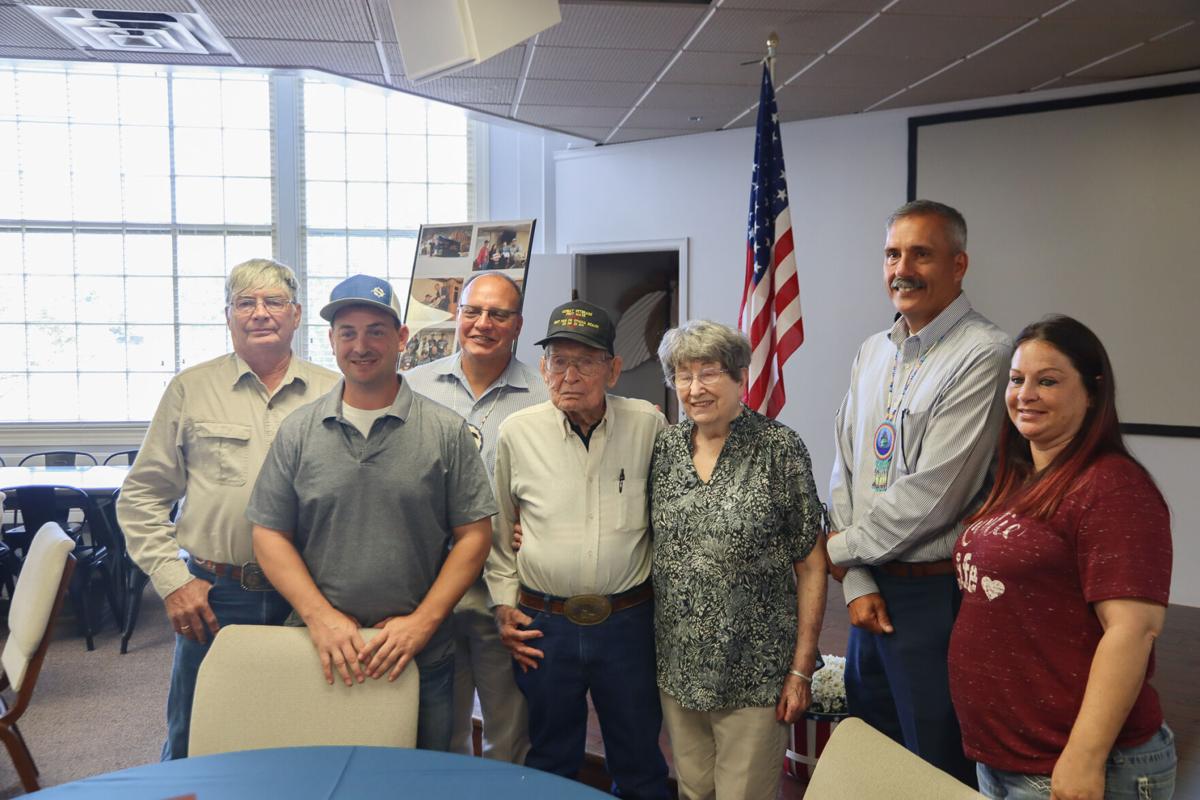 Bill Parker surrounded by family who were in attendance to celebrate the World War II veteran.

A special luncheon was hosted by All Veterans Association at Kirk of the Hills. Some of Parker's family and friends were also in attendance.

One of Bill Parker's relatives watches the presentation through Face Time.

Bill Parker and David Rule of All Veterans Association

Bill Parker surrounded by family who were in attendance to celebrate the World War II veteran.

It has been 77 years since Bill Parker led the first wave of soldiers on to Normandy’s Omaha Beach in the opening moments of D-Day. He relives that battle daily.

“I think about it every night. There's no way getting away from it,” says the 96-year-old Choctaw Nation citizen. “I spent 70 some odd years trying to forget all this. I guess it needs to be brought out in the open. I'd like to let the younger generation know that there is nothing free and that we paid a big price for being free.”

On Tuesday, Sept. 14, Choctaw Nation Chief Gary Batton and Assistant Chief Jack Austin, Jr., honored Parker for his World War II service. They presented the veteran with a Choctaw flag and other items at a special lunch hosted by All Veterans Association at Kirk of the Hills.

“I don't know if you realize what you mean to us as the Choctaw Nation,” says Batton. “When we talk about that warrior spirit. We fight, but we fight for the right causes. We fight for the good things in life and that's what you've done. You fought for our freedom.

“You represent Choctaw, you represent Oklahoma coming from the big city, McCurtain, Oklahoma, and the United States. I just appreciate you so very much for all that you've done and what you stand for.”

The recognition comes so late in Parker’s life because he kept his experiences to himself until five years ago. He never talked about it with his late wife, Colleen, who he fell in love with while in high school and married in 1945. She passed away in 2018.

That changed in 2016 when he got fed up reading Tulsa World’s World War II profiles written by Tim Stanley that at that point had failed to feature a D-Day infantry veteran, so he called the writer.

“It got me thinking, and it kind of aggravated me because everything he wrote was about the Navy or Air Corps, artillery men or something,” says Parker as he laughs. “I got a little peeved reading it, and I saw his name down there, so I called him. I didn't say ‘Hello’ ‘Good Morning’ or nothing when he answered. I just said ‘Why don't you put somebody in there out of the infantry?’ I didn't say nothing for a little bit then he said, ‘I don't know any, do you?’ I said, ‘Well, I know one.’ Then I said, ‘I was the first man on bloody Omaha Beach.’ He said, ‘I want to talk to you.’”

Stanley’s story changed everything. Parker says he’s received calls and notes from people all over the world and many he “can’t even pronounce their names.” He now stays in touch with teachers in Guadalupe and Canada. He attends special luncheons honoring him.

Parker, a soft-spoken cowboy, has grown more comfortable with sharing parts of his story. He says he’s written many pages about his experiences and then sent them through a paper shredder.

After falling a credit or two short of graduating from McCurtain High in 1943, Parker says he was allowed to walk across the stage in cap and gown. (He received his diploma in a 2010 ceremony at the high school.) Then came the draft papers in July.

He boarded a train for boot camp to prepare for war.

Eleven months later, on June 6, 1944, Parker, followed by the rest of the 116th Infantry’s 2nd Battalion, entered World War II when the ramp dropped on their Higgins boat and he led the charge out of the English Channel and on to the French beach. He believes he was the first soldier to touch sand.

“There was no bodies in front of me,” says Parker as he recounts that morning. “I looked back and saw many.”

Parker was among the victorious on D-Day and says he later learned he marched 600 miles (some of that with a foot so swollen from shrapnel, he briefly thought he was going to lose it) across France and Germany until “I met the Russians on the other side of the Elbe River.”

He says talking about the war has helped him and he wished he had maybe done it sooner. He’ll turn 97 on Nov. 1. He continues to ride his horses daily and says “I’ll possibly stop riding when I’m 100. That’s what I tell myself. Did you notice I said, ‘possibly?’

“I was born a cowboy and I’ll die one, eventually,” he says with a smile.